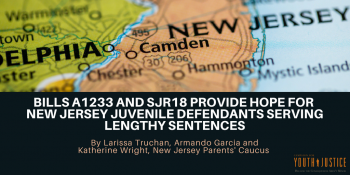 In 2012, the Supreme Court established in the landmark Miller v. Alabama decision that “the Eighth Amendment forbids a sentencing scheme that mandates life in prison without the possibility of parole for juvenile offenders.” Mandatory sentences to life without parole, the court argued, prevent the judge from considering the “mitigating effects of youth,” which were acknowledged in the Court’s earlier rulings of Roper v. Simmons (2005) and Graham v. Florida (2010). As a result, Miller established that mandatory life sentences without parole are unconstitutional for juveniles, and judges must consider youth-related mitigating factors, including children’s individual characteristics and life circumstances, during sentencing.

While the Miller decision categorically bans juveniles from receiving automatic life without parole, it leaves open the question of whether this also applies to juveniles receiving sentences equivalent to life without parole, particularly multiple, separate sentences that functionally add up to life without parole. In New Jersey, Ricky Zuber, sentenced to 110 years and 55 years of parole ineligibility, and James Comer, sentenced to 75 years and 68 years of parole ineligibility, both argued that their consecutive terms were the equivalent to life without parole, and therefore unconstitutional. In a significant decision, the Supreme Court of New Jersey determined that the Supreme Court’s findings in Miller apply “with equal strength to a sentence that is the practical equivalent of life without parole,” as “[t]he proper focus belongs on the amount of real time a juvenile will spend in jail and not on the formal label attached to the sentence.” As a result, both Zuber and Comer were deemed eligible for resentencing.

In order to prevent serious constitutional issues, the Supreme Court of New Jersey recommended in State v. Zuber and State v. Comer  that  “the Legislature [] consider enacting a statute that would provide for later review of juvenile sentences that have lengthy periods of parole ineligibility.” Bill A1233, filed this January, if passed  would allow a youth serving a sentence that includes at least 20 years of parole ineligibility to apply for a resentencing hearing 10 years after his or her conviction.  It also provides parole eligibility after 20 years of incarceration. For those like Zuber and Comer, with lengthy sentences without parole eligibility, the statute would  have a potentially life-altering impact, especially since the bill would take effect immediately and apply retroactively.

Bill A1233 would also require judges to consider the “mitigating factors of youth” during sentencing, extending the Supreme Court’s Miller factors beyond their use in mandatory life without parole cases. The mitigating  factors include, “the defendant’s age at the time of the offense,” “the role of the attendant characteristics of youth in the offense,” and “any obstacle the defendant may have faced as a child.”

While passing A1233 would provide a direct solution to the NJ Supreme Court’s directive in Zuber, Senate Joint Resolution No.18 (SJR18) proposes the formation of the “Commission to Review Constructive Sentences of Life Imprisonment on Juvenile Offenders,” that would provide for additional  careful and comprehensive reform for youth tried as adults in New Jersey. This 15-member commission would be responsible for recommending legislation in accordance  with the Zuber decision. Among their responsibilities are: recommending legislative changes to afford waived juveniles the opportunity or release where appropriate, and deciding whether the current age of majority is an appropriate threshold to determine “mitigating qualities of youth."

The Commission to Review Constructive Sentences of Life Imprisonment on Juvenile Offenders will include 15 members, four actively serving legislators, two from the NJ Senate and two from the General Assembly. In addition, both members of the legislative body cannot come from the same party. Six members of the Commission must be ex officio, i.e. office holding, individuals. The Administrative Director of the Courts, the Attorney General, the Commissioner of Corrections, the Executive Director of the Juvenile Justice Commission, the Public Defender, and the Chairman of State Parole Board must serve on the Commission. The final five members are public individuals, appointed by the governor. These members must include a retired superior court judge, a county prosecutor recommended by the County Prosecutor’s Association of the State of New Jersey, a victims’ rights advocate, a representative of an organization that defends civil rights or social justice, and a faculty member of a law school in New Jersey that specializes in juvenile justice.

It is worth noting that the commission lacks representation from directly impacted individuals who were incarcerated in adult prisons as youth.  This perspective is the most critical in fully appreciating the impact of the Commission’s recommendations. The Commission’s primary responsibility is conducting a comprehensive study of juvenile sentencing with legislative recommendations based on their findings. This non-partisan study would provide valuable, objective information to the governor and the Legislature. The commission would also consider the impact of Zuber and decide how to incorporate the Miller factors into legislation.

In addition, SJR 18 calls on the Commission to consider whether the age of majority, age 18 in New Jersey, is the “appropriate age threshold” for considering the mitigating factors of youth during sentencing.  This particular Commission requirement could result in the group recommending that the mitigating factors of youth are considered when sentencing individuals over age 18. A number of states have grappled with the issues of how to treat “emerging adults” ages 18 to 24 in terms of sentencing and rehabilitative treatment.  This Commission report could open up the opportunity to similar discussions in New Jersey.

This legislative session, New Jersey residents who support youth justice, and believe that individuals should not spend decades of their lives incarcerated for mistakes they made as youth, should contact their legislators and tell them to support A 1233 and SJR 18.