Committed to the Fight for Justice: CFYJ’s Journey to Montgomery and Selma 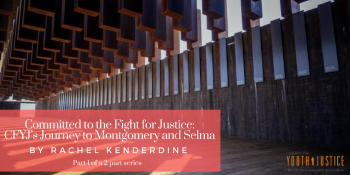 This is the first of a two part series.

When the Equal Justice Initiative’s new Legacy Museum and National Memorial for Peace and Justice opened in April, CFYJ staff knew it was imperative to make a trip to Montgomery, Ala. to visit these powerful landmarks. One of our significant goals for 2018 has been to make our commitment to racial equity and justice explicit to our partners and the public; to reinforce our commitment to what racial equity really looks like--and the actions and steps we can take to decrease racial disparities and keep fighting for change. We know that youth of color still disproportionately experience police violence and the adult criminal justice system, as over 70 percent of youth in the adult criminal justice system are youth of color. As a campaign, it is our job to make change in the broken systems that still disempower and disenfranchise our youth--and this trip helped us to see why it is important to remain committed to the fight for justice, even when the current political climate makes this feel impossible.

Our first stop was to the National Memorial for Peace and Justice, a memorial dedicated to the 4000-plus victims of racial terror lynchings in over 800 counties across the United States. The sheer magnitude of the memorial was both horrifying and humbling. Black men and women were viciously murdered across the South, West, and Midwest for trivial activities, like unionizing, defending themselves, or walking too closely to a white person. To see each of the names of the victims, engraved on the steel blocks dedicated to each county where a lynching occurred, was more painful than anyone could have prepared us for, especially because so many victims remain unknown and their names have been lost in history. Even into the 1940’s and beyond, African American people were attacked and killed in their own communities, with less than 1 percent of the perpetrators of the violence charged or sentenced with a crime. This is an unacceptable reality, but one we unfortunately see repeated even today--when the police are called on black children for selling water outside a zoo, when New York police lock up Kalief Browder for three years for a crime he did not commit, and when men like Alton Sterling and Philando Castile are senselessly shot and killed--and there are dozens of other examples. Laws may have changed, but the wounds of racial terror in our nation still exist and fester every day.

The Legacy Museum, which explores the legacy of slavery as it led to mass incarceration, was our next destination. The fact that the abolishment of slavery led to our current system of prisons, work camps, and mass incarceration is no secret: the 13th amendment, which abolished slavery in the U.S., explicitly states that slavery is illegal except, “as a punishment for crime whereof the party shall have been duly convicted.” In other words--prisoners can still do slave-level labor, without pay, for as long as they are incarcerated. As a result, black men were imprisoned across the South--again, often without cause--for decades and shipped to work camps to continue to do slave labor at the beckoning of white masters. This system has perpetuated itself through today, when nearly 40% of the prison population in the United States is made up of black males, even though they make up only around 6 percent of the overall population.

As a campaign focused on Juvenile Justice, it was especially moving to hear the stories of children held in chains by slavery in the past and imprisonment as adults in the present. Just as children kept in the bondage of chattel slavery were ripped from their parents and communities then, so now are youths taken from those that love them and communities that could heal them, and held instead in adult jails and prisons. The Museum featured letters from youths in adult jails, and several stories of young people sentenced to die in prison, and served as an empowering reinforcement to CFYJ staff--that bondage is not dead, and that in many cases youth of color are deeply affected by the horror of adult jails and prisons.

This is why CFYJ remains committed to the fight for justice, and will continue to focus on our mission until there are no children left in the adult system, and the racial disparities perpetuated by the current juvenile and criminal justice systems are corrected. Our trip to Alabama affirmed these truths for us, and allowed us to understand the pain and suffering inflicted for centuries by slavery and racial terror in our country.

If you would like to get involved with EJI’s lynching research and community remembrance projects--including collecting soil at the sites of lynchings in your area, or starting the process to claim your county’s lynching memorial--you can learn more here.