Fighting to Prevent LGBTQ+ Erasure by the Department of Justice 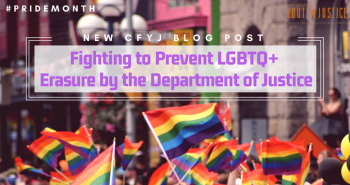 June is Pride Month, a time during which the LGBTQ+ community celebrates an array of identities that have long been rejected by mainstream culture and politics. But while rainbow flags fly across the country, LGBTQ+ people face increasing erasure as the Trump administration takes strategic steps to hinder data collection for and about this community. Most recently, the Department of Justice (DOJ) has made initial efforts to revise portions of the National Crime Victimization Survey by eliminating questions about gender identity and sexual orientation among 16- and 17-year-olds surveyed by the department.

Per the Bureau of Justice Statistics, the National Crime Victimization Survey (NCVS) seeks to collect data from over 135,000 households across the country about the “frequency, characteristics, and consequences of criminal victimization in the United States.” More specifically, the survey addresses reported and unreported victimization through nonfatal personal crimes -- such as rape and sexual assault, robbery, aggravated and simple assault, and personal larceny -- as well as household property crimes.

By asking respondents to indicate their sexual orientation and gender identity, the DOJ created one of the most reliable and accurate sources of data about self-reported violence perpetrated against LGBT people in the United States. As such, in eliminating these questions, the Trump administration is making an active effort to undermine the unique and devastating reality faced by the LGBTQ+ community, including their increased risk of becoming victims of hate crimes and physical and sexual violence as a direct result of their identities.

Collecting data on marginalized communities, and LGBTQ+ people, in particular, has posed significant challenges as advocates have called for increased inclusivity in nationally representative surveys and statistics. Fears of being outed in unsafe and intolerant communities has made many LGBT-identifying individuals hesitant to report abuse and hate crimes to law enforcement officials. The confidential reporting of responses on the NCVS may have worked to offset this disparity. Additionally, per the Human Rights Campaign, the reporting of hate crimes to federal government agencies like the FBI is not mandatory, and thousands of law enforcement agencies have, in the past, not submitted data. As a result, the FBI’s annual report on hate crimes does not accurately convey the extreme degree of violence faced by the queer community.

Despite these discrepancies in reporting, LGBTQ+ advocates rely heavily on government-sourced data to understand victimization within the queer community and to supplement their own privately funded research. The FBI estimates that, of 6,121 hate crime incidents reported to them in 2016, 1,076 were motivated by sexual orientation bias and 124 were motivated by gender identity bias. And a separate survey of students, conducted by GLSEN in 2015, found that 27% of LGBTQ students (age 13-21) had been physically harassed in the past year because of their sexual orientation and 20.3% because of their gender expression. Roughly 60% reported they had been sexually harassed in the past year at school.

The NCVS is one of the largest nationally representative surveys on the victimization of Americans annually, making it one of the most valuable sources of data on vulnerable communities prone to violence. Wiping questions on sexual orientation and gender identity trivializes the plight of LGBTQ+ Americans, which is the ultimate intention of the Trump administration and Jeff Sessions’ Department of Justice. So during Pride Month, and year-round, we must step up for LGBTQ+ folks whose voices and existences are under constant threat of erasure and call for the continued inclusion of these questions in the NCVS.