Is it Enough? The Implementation of PREA’s Youthful Inmate Standard 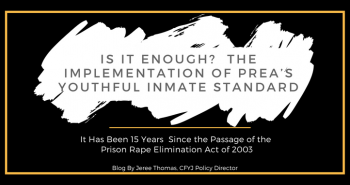 This September marks the 15th Anniversary of the Prison Rape Elimination Act (PREA), a federal law enacted to address the problem of sexual assault and rape in U.S. detention centers, jails, lock ups, and prisons.  Regulations for the law specifically address one of the most vulnerable populations in adult jails and prisons: youth under age 18.

PREA’s Youthful Inmate Standard was developed to create a minimum standard that protects youth in adult facilities from being raped or sexually assaulted by requiring that youth are held in housing where they are sight and sound separated from adults.  The standard also requires supervision when youth are outside of housing units with incarcerated adults. The challenges associated with keeping youth sight and sound separated under the standard has helped contribute to a growing number of state legislatures passing bills to create a presumption or a requirement that youth under 18 are held in juvenile placements even when they are prosecuted as adults.

However, for the youth who remain in adult facilities, there are ongoing limitations associated with implementation of the law.  In light of the 15th Anniversary of PREA, the Campaign for Youth Justice (CFYJ) reviewed over 800 audits of adult correctional facilities to identify how the facilities are complying with the Youthful Inmate Standard. The key findings of that review, will be released in a forthcoming brief entitled Is It Enough: The Implementation of PREA’s Youthful Inmate Standard.  These findings include the following:

After examining the PREA audits, CFYJ found that generally even facilities that exceeded the Youthful Inmate Standard were providing basic necessities that could be better provided in a juvenile facility where youth would have greater access to educational and vocational programs.

Compliance with the Youthful Inmate Standard, is costly for many states, especially as states struggle to retain qualified correctional officers to staff these facilities.  As a result, a growing number of states and localities are finding alternatives to adult facilities for youth. The number of youth in adult jails on any given night has declined by over 50 percent from 2000 to 2016 according to data from the Bureau of Justice Statistics.

While PREA’s Youthful Inmate Standard was a step in the right direction, when it comes to providing youth what they need to develop into productive adults, it’s not nearly enough.  For many young people who remain in adult jails, compliance with the standard has resulted in prolonged solitary confinement, and continued threats to their physical safety. To ensure safety and rehabilitation, youth should not be held in places that were not designed or programmed with them in mind.