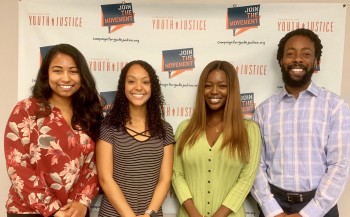 Summer is here and CFYJ has a new class of summer fellows! Our 2019 fellow class represents diverse backgrounds from all over the country and have come to Washington this summer with one goal-- to help advance justice for young people. Learn more about their backgrounds and aspirations.

Ashni claims both South Carolina and Belize as home. She comes to CFYJ from South Carolina, where she is a rising Senior at Clemson University studying psychology and criminal justice. Growing up in a third world country, she often saw poverty and children yearning to flourish. After moving to the United States, she was disheartened to see the same conditions for children of color and youth from indigent backgrounds. Inspired by these tragedies, she hopes to be part of the solution by striving to create the standard of equality in the criminal justice system that is long past due.

Ashley comes to us from Canóvanas, Puerto Rico. She’s a recent graduate of the United States Military Academy at West Point, where she majored in Law and Legal Studies. After her freshman year at the Academy, Ashley took part in a two week civil rights trip throughout the southern United States. Upon learning that the fight for equal protection and treatment under the law is not yet over, she was motivated to pursue activism within the criminal justice system. In her work, she hopes to use the law to spurr much needed change.

Marion hails from Little Rock, Arkansas where he’s currently a rising 2L at the University of Arkansas School of Law. He attended Davidson College for undergrad and then the University of Arkansas, Little Rock where he earned a Master’s in Public Administration. Juvenile justice issues resonate with him because he feels that when any youth serves time within a juvenile or adult  institution, our country's attempt at fairness and justice becomes greatly undermined. Seeing as youth who interact with the criminal justice system are usually victims themselves, Marion hopes to work towards a more just system.

Francine is no stranger to D.C. Originally from Richmond, Virginia, she attended Howard University for undergrad and is now a rising 3L at the University of South Carolina School of Law. She chose to focus on juvenile justice because she grew tired of seeing marginalized youth being taken advantage of by a system that was designed to protect them. Francine hopes to change this by representing marginalized youth in cases such as the ones portrayed in Ava Duvernay’s “When They See Us.”

This summer, our fellows will be leading the Summer Learning Institute speaker series in collaboration with ten other national juvenile justice organizations. Keep an eye on out for blogs chronicling these talks!