All Tricks, No Treats for Some Young Teens This Halloween

Posted in Across the Country Monday, 29 October 2018 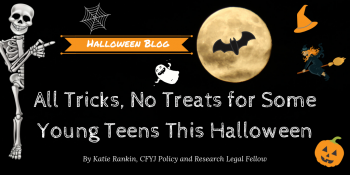 Halloween is one of those quintessential holidays of childhood--when we still allow children to be children, engaging in fantasy play, and drumming up some harmless, time-tested tricks. We now learn--that even trick-or-treating is available to only some of our children; for children of color, the tricks on them - and it’s not funny. Recently, news stories have highlighted several  municipalities in Virginia whose “Halloween Rules” make the holiday anything but childlike. The law for each locality differs, but the overriding feature establishes age limits and a curfew for the night. These Virginia towns are not alone - cities across the country have similar ordinances that govern trick-or-treating on Halloween. The laws are not new; Portsmouth and Chesapeake, Virginia created their laws in 1968 and 1970, respectively. Portsmouth had a particularly bad Halloween in 1967 when a 14-year-old was stabbed and a high amount of vandalism occurred. In response to this, members of the community petitioned the city to create the age and time limit Halloween law that remains on the books today.

How Ghoulish Are these Ordinances?

Is it “Trick-or-Treating” or Breaking Curfew?

Most of these municipalities claim that they will not be actively seeking out older kids the night of Halloween. However, in a city like Chesapeake, VA, with one of the highest arrest rates for youth of color in the state, we have to ask who these laws are targeting? As the City of Chesapeake put it, they “will focus on making sure the evening is safe for everyone, not actively seeking out violations of the time or age limits. For example, a thirteen year old safely trick-or-treating with a younger sibling is not going to have any issues. That same child taking pumpkins from porches and smashing them in the street more likely will.”

Some might argue that there is no harm in these ordinances given there is no plan to enforce them. After all, law enforcement says they aren’t looking for older kids anyway, right? Then why are the punishments so severe for behavior that is clearly aligned with a favorite childhood holiday? The City of Chesapeake Code of Ordinances states that if a child over the age of 12 is out on Halloween, they could be fined $25-$100, confined in jail for up to 6 months, or both; and if ANY person is out past 8 p.m. engaging in trick-or-treat activities they could be fined $10-$100, confined in jail up to 30 days, or both. Norfolk, VA, one of the cities with a Halloween ordinance, has one of the state’s highest juvenile intake rate, and more than 70% of those young people are black. Given that black youth make up 20% of all youth in Virginia, but constitute 43% of juvenile intakes, with 71% of those youth in out of home placements, we all need to ask ourselves who this law is “treating” and who it is “tricking.” Ridiculous ordinances like the ones that govern trick-or-treating most likely help contribute to these disparities.

We must Stop Criminalizing Typical Youth Behaviors. We need to let kids be kids. Criminalizing such an innocent holiday could have very negative effects, particularly on youth of color who are over-policed. These ordinances are not about the select few kids who smash pumpkins or toilet-paper houses on Halloween night; they are designed to criminalize typical youth behavior in ways that cause more harm than youth behavior itself.  While it may seem that these ordinances are about doing something to appease public perception of safety risks, the severity of their punishments tell a different story.

Rather than creating laws that criminalize children for being children, we should be creating opportunities where more young teens can safely celebrate these holidays. Locally sponsored haunted houses, or Main Street Trick-or-Treating, or even competitions on who can throw the biggest pumpkin could help provide an alternative to arrests and fines, which we know impacts children of color in harsh and unjust ways. Let’s start TREATING our youth like youth, and celebrate these holidays together.