Posted in Across the Country Thursday, 25 October 2018 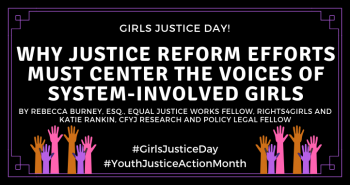 In celebration of Girls’ Justice Day, we encourage you to uplift the voices of our most marginalized young women and girls. October marks both Domestic Violence Awareness Month and Youth Justice Action Month, so it is only fitting that we focus on the experiences of girls in the juvenile justice system and the link between abuse and system-involvement.  However, all of our justice reform efforts must center the opinions of justice-involved girls who are the experts on their lived experiences.  We must listen to them.

Earlier this month, 17-year old LaShonda Childs was murdered by her abusive 28-year old ex-boyfriend. She had reported the abuse to police, and her ex was arrested and sentenced for misdemeanor assault. She even got a protective order against him, which was violated. Only two weeks before her death, she detailed the abuse on Facebook. Yet in spite of her numerous calls for help, she remained unsafe. The system failed her. We failed her. What would happen if we listened to survivors?

LaShonda’s story is similar to many girls in the juvenile justice system who have experienced severe abuse and trauma. In a 2015 report entitled, The Sexual Abuse to Prison Pipeline: The Girls’ Story, Rights4Girls, the Georgetown Law Center on Poverty and Inequality, and the Ms. Foundation for Women highlighted the pathways of gender violence that funnel girls into the justice system. The report describes staggering rates of sexual violence, sexual abuse, and family violence reported by girls in the justice system and our failure to adequately respond to the unique needs of these vulnerable young women.

Children, particularly girls, are often lost in the conversation around criminal justice reform. Girls, specifically black girls, are underrepresented in system reform efforts while also over-criminalized for their responses to trauma. Research, policy, and system reform has been centered around the male population. Although the rate of youth involved in the juvenile justice system overall has steadily decreased, the rate of girls involved has been steadily increasing. When we do not center the needs of girls and the voices of young women involved in the juvenile justice system, reform efforts do not benefit girls.

How can we prevent the overcriminalization of girls?

● Abuse to prison pipeline: There is a connection between trauma and justice involvement that is linked with the experience of sexual of physical violence. According to one study, 81% of girls in the juvenile justice system had experienced childhood sexual abuse prior to any justice involvement.
● Disproportionate criminalization for status offenses: Status offenses are acts that are only criminalized because they are committed by minors. Girls are disproportionately arrested and detained for status offenses like truancy and running away.
● Crossover from child welfare to the juvenile justice system: This occurs because a youth is placed in the child welfare system and then is referred the juvenile justice system by those in charge of their care, or because the environment they are placed in put them at a higher risk for delinquent behavior.
● Domestic violence and mandatory arrest policies: Many states have mandatory arrest laws that were designed to protect against intimate partner violence, however one of their unintended consequences has been the arrest of girls for simple assault. Today, in much of the country, if a girl is acting out of chaos in the family and even if there is no injury, they are arrested under these laws.
● School pushout: Girls, usually girls of color, are targets of harsher school sanctions for subjective behaviors like defiance and dress code violations.
● Poverty and housing instability: Girls engage in survival crimes (loitering, trespass, theft) when they lack housing and financial means to support themselves. In a study by The Field Center, 67% of homeless females report being offered money for sex.

What can you do to give girls a voice in the juvenile justice conversation?

In order to elevate the voices of marginalized young women and girls we must practice civic engagement. Encourage your law and policy makers to research the pathways of gender violence that are leading girls into the juvenile justice system so that they can make trauma-informed, gender-responsive, policies that address the unique needs of girls. Citizens can also do their part by engaging with elected officials or decision-makers and letting them know that girls’ justice is a priority in their community. With Election Day quickly approaching, Rights4Girls and the Campaign for Youth Justice urge you to engage with your local candidates and learn where they stand on issues that impact girls’ justice such as domestic child sex trafficking. Let’s work together to make our communities a safer place for girls.