Counting Incarcerated People on the 2020 Census 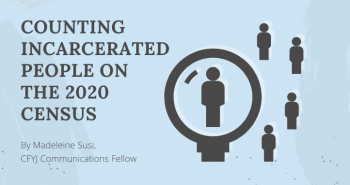 In the middle of the current global health pandemic it is important to remember it is time to fill out the 2020 census. Every ten years, the Decennial U.S. Census is sent out nationwide to record the population of the country and the location of where each person lives. The census asks questions about the living situation and demographics of each resident in the U.S. in order to better understand the composition of the population and to ensure that each person is only counted once in the correct place.

Understanding the population totals throughout the country is not only important for federal funds, grants and support to states and communities, but it is also crucial for apportionment. Article I, Section 2 of The U.S. Constitution requires that every ten years, the 435 seats in the U.S. House of Representatives be divided among the states based on the state population counts. The results from the 2020 census will therefore determine the number of seats each state will have in the House of Representatives for the next 10 years.

While the question of where one lives may seem easy, for many U.S. citizens it is much more complicated. For incarcerated people, there exists an ongoing question of whether they should be counted as residents of the prison that they reside in or residents of their address before incarceration. The United States Census Bureau claims that, in order to ensure consistency and to count every person only once, they follow the guidelines under the “usual residence rule” which dictates that people will be counted where they “eat and sleep most of the time.” This means that, continuing into 2020, the census will count incarcerated people as residents of the place they are imprisoned instead of their homes - this also impacts youth in facilities.

While the census has always counted incarcerated people as residents of the location where they are serving their sentence, this decision has become more problematic as the prison population has risen. Counting incarcerated people as part of the population where the prison is located can exaggerate that area’s population and increase the political power of the residents there. Correctional facilities are increasingly located in areas that are geographically and demographically far removed from the communities to which most incarcerated people belong. leading to misleading conclusions about the size and growth of communities.

Not only does this dynamic influence political power, but it also often creates inaccurate population counts. After incarcerated people are counted for the census, the results are often not reflective of where these people actually live. In a 2016 memo from the Prison Policy Initiative, the group states that “people who are incarcerated on Census day are at home most of the time” and “regardless of sentence length, people in prisons don’t reside...at the particular correctional facility that they happen to be at on Census day.” The organization also notes that for most incarcerated people, their home remains their only actual stable address. On the other hand, other groups, such as students from boarding schools, are awarded different privileges and are still counted on the census at their home address despite not permanently living there. These issues culminate into a reality in which while prisoners are absent from their communities, they are being used as political leverage elsewhere.

During this time when political power can make real and tangible changes in our country, it is extremely important to create an accurate depiction of the country’s composition on the 2020 census. By filling out the forms that come to our homes this time of year, we are giving our communities and states the ability and power to be represented in future decisions for our country. Though the statement has already been made on how incarcerated people will be counted for this census, is it still important to account for prison populations in a way that is representative and meaningful. Every single citizen matters and each part of the country should be represented in our government.