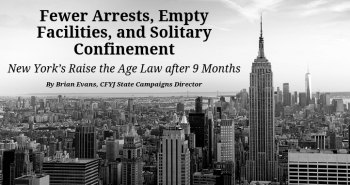 New York’s Raise the Age law has been in effect for 16-year-olds for over 9 months now (it goes into effect for 17-year-olds on October 1 of this year).  The results are (mostly) good, and in line with what we have seen in other states.

For example, in New York City, arrests of 16-year-olds, especially for misdemeanors such as “petit larceny, criminal possession of marijuana 5, assault 3, theft of services, criminal trespass 2 and 3, and criminal possession of a weapon 4” have dropped significantly. And facilities that were anticipated to hold large numbers of children are not even close to full.  According to one recent report: “a total of 171 beds are ready and waiting for youthful offenders but less than 12 percent have been filled.”

There are some regional disparities, as one would expect with any sizeable state. Under New York’s law, 16-year-olds (and, soon, 17-year-olds) charged with felonies (known as Adolescent Offenders, or AOs) actually start in a “Youth Part” of the adult system but are presumed to be removed from the adult system to family court, unless they are charged with displaying a deadly weapon, causing “significant injury,” or engaging in unlawful sexual conduct, or prosecutors can argue successfully that there are “exceptional circumstances.”

According to the first six months of statewide data, the removal rate for AOs has been over 76%, and even higher in New York City. This means that nearly 8 out of 10 16 year olds charged with felonies had their cases transferred out of the adult criminal court system.  But in some western New York counties, the rate have been lower, e.g., Onondaga (Syracuse) 55.5%, Monroe (Rochester) 55%, and Erie (Buffalo) 51%.

A major disappointment in the ongoing implementation of New York’s Raise the Age law has been the incarceration of 16 and 17 year olds serving adult sentences. According to the law, AOs given adult sentences are supposed to be housed in a specialized facility run by the adult correctional system (the Department of Corrections and Community Supervision (DOCCS)), but with the assistance of the juvenile system (the Office of Children and Family Services (OCFS)).

One AO facility has been the subject of disturbing reports of abusive conditions and excessive use of solitary confinement, and appears to be run for all intents and purposes like adult prisons, by DOCCS. Recently, a federal judge, citing “irreparable harm”, ordered the removal of one 17-year-old from solitary, after the child had spent 7 months in segregation. Calls to remove youth from  AO facilities and place them in secure facilities operated by the juvenile system (OCFS) argue that the current facilities “pose grave risks to youth who come to the justice system with significant vulnerabilities, including high rates of mental illness and cognitive deficits.”

This problem, inflicting significant harm on teenagers the Raise the Age law was designed to help, needs to be solved, preferably by removing DOCCS from the business of imprisoning children.

But, in most other ways the Raise the Age law is having a positive impact, resulting in fewer arrests of 16-year-olds, and fewer than expected children incarcerated.