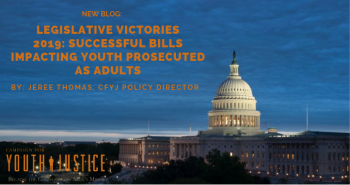 In 2019, legislators across the country introduced over two hundred bills impacting youth prosecuted as adults. The Campaign for Youth Justice started tracking and publishing these bills in weekly updates archived here. The bills ranged from positive legislation to raise the age to eighteen in Michigan to negative legislation to lower the minimum age of mandatory transfer for certain offenses in Indiana.   Overall, youth, families, advocates, and legislative champions successfully passed a number of bills that will keep youth out of adult courts, jails and prisons.

The bills ranged from positive legislation to raise the age to eighteen in Michigan to negative legislation to lower the minimum age of mandatory transfer for certain offenses in Indiana.   Overall, youth, families, advocates, and legislative champions successfully passed a number of bills that will keep youth out of adult courts, jails and prisons.

Here are a few highlights from the 2019 legislative session.

Colorado- HB 1149 - This bill requires a study on the age of delinquency with a focus on determining whether to raise the age beyond eighteen in Colorado.  The study committee will look at whether juvenile services are appropriate for the eighteen to twenty-four population. They must submit their study report by June 30, 2020.

North Carolina- S.B. 413-  The Raise the Age Modification bill updates the 2017 legislation before implementation of the law on December 1, 2019.  This bill was developed from recommendations of the Juvenile Jurisdiction Advisory Committee. Specifically, it notes that the “once an adult, always an adult” provision does not apply to youth charged with misdemeanor motor vehicle violations or infractions other than driving while impaired.  It also creates a provision to allow youth to be transferred back to juvenile court from adult court if the prosecutor and defense counsel agree to the transfer. It also provides for the automatic expunction of records when a youth is remanded back to juvenile court from adult court.  The Governor signed the bill into law in August 1, 2019.

Louisiana- HB 241- This Raise the Age technical corrections bill reconciles aspects of Louisiana’s code that did not reflect or conform with the state’s raise the age law.

Massachusetts - S. 825/ H. 3420- In Massachusetts, advocates, families, and even District Attorneys are calling on legislators to raise the age of juvenile court jurisdiction beyond age eighteen by gradually adding 18 to 20-year-olds to the juvenile justice system.

Washington - HB 1646-  Under this legislation, youth charged as adults will be able to go straight to a Department of Children, Youth & Families facility instead of the Department of Corrections to determine their release date. These youth are also eligible to remain in youth facilities until age 25.  Before this bill, these youth were only eligible to be in these facilities until age 21.

North Dakota- HB 1076- This bill removed language that allowed youth prosecuted as adults to be transferred from a juvenile facility to an adult prison before their eighteenth birthday.

Oregon- SB 15- Authorizes Youth Development Division to inspect and collect data from facilities in which juveniles are detained to ensure compliance with the federal JJDPA.

North Carolina- S.B. 413 - A part of the Raise the Age Modification bill mandates that youth tried as adults under age 18 are held in an approved juvenile detention facility.

Florida - HB 7125 - The Florida First Step Act included language to end the mandatory direct file (also known as statutory exclusion) of youth.  As a result, judges will no longer be mandated to waive youth into adult court.

Oregon - S. 1008 - This bill ends the statutory exclusion of youth from juvenile court rolling back Measure 11, the ballot initiative that passed in 1994 and imposed harsh mandatory penalties on youth.  Now every youth will have a hearing in front of a juvenile court judge before being considered for transfer.

California- AB 1423 - This bill provides for reverse waiver if a youth pleas to or is convicted of a lesser offense than the charge that caused the youth’s transfer to adult court.

Connecticut- HB 7389 - This bill preserves the confidentiality of a youth’s case that has been transferred to adult court.  Also initiates a study of how to hold youth tried as adults.

Oregon- HB 3261- This bill modifies the requirement to record interviews with youth under eighteen including custodial interviews conducted inside law enforcement facilities by peace officers, school resource officers or special campus security officers of investigations into misdemeanors, felonies and acts that, if committed by adult, would constitute misdemeanors or felonies.

Nebraska- LB 354- This bill provides an opportunity to seal a youth’s record when that youth has a case filed in criminal court, that is subsequently transferred to juvenile court.

Wyoming- HB 44- This bill allows for the expungement of records for youth that did not result in a conviction or juvenile adjudication.

North Carolina- SB 562 - The Second Chance Act would allow expungement for certain offenses committed prior to Raise the Age implementation for individuals who were under 18, but at least 16 at the time of the offense.  Applies to misdemeanors and Class H and I felonies except for offenses involving impaired driving or sex offender registration.

In addition to this legislation there have been a number of successful bills to limit the solitary confinement of youth in adult facilities.  Please visit the Stop Solitary for Kids Campaign and the ACLU’s Stop Solitary Campaign to review their updates on this legislation.  In addition, please visit the Campaign for the Fair Sentencing of Youth’s website to learn more about legislative and litigation efforts to end extreme sentencing of youth, particularly juvenile life without parole.

While the 2019 legislative session has ended for many states, there are still several legislatures that are still in session and may pass critical legislation in the fall.  Please sign up for the Campaign’s weekly email updates that include legislative roundups to stay up to date.