What about our girls in the system? 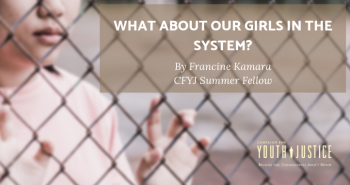 On July 16th, 2019, the House Judiciary Subcommittee on Crime, Terrorism, and Homeland Security held a hearing to discuss women and girls in the criminal justice system. When discussing prison reform, the topic is usually centered around the experiences of  men. Unfortunately, we rarely hear from the women and girls who are incarcerated. At the hearing, formerly incarcerated women described their personal experiences in the system. Theses horrific accounts included abuse, lack of privacy, and harassment, among other things.

At the hearing they discussed the effect that the war on drugs had on the incarceration of women and girls for low level offenses. Witnesses on the panel highlighted that women are typically convicted for drug conspiracy, despite not being significantly involved. For example, when their boyfriends or family members are incarcerated for drugs, women are also indicted on conspiracy charges and are often not offered plea deals.

Another issue that came up was privacy and security in prisons. Some of the witnesses that were formerly incarcerated shared how male guards have unrestricted freedom to access their personal spaces while showering and changing. Allowing men to invade these areas where women are physically vulnerable deprives them of any sense of privacy. As one witness said, the power dynamics within prisons leaves women and girls in a particularly vulnerable state. Male guards are able to use their power to form inappropriate and often times coerced relationships with inmates.

The issues of pregnant women was also brought to the forefront. Prisons are not designed in a way to accommodate and respond to women’s needs. For instance, in many facilities pregnant women do not receive necessary prenatal care, and are often neglected. Further, women and girls are often shackled during transport, labor, and delivery. While there is limited data on pregnant and parenting system-involved girls in particular, according to one study, of the girls who were pregnant while in custody, 29 percent were placed in physical restraints, including shackled at the wrists, belly and/or ankles, during labor, delivery and/or post-delivery. Adding to the trauma, mothers are often separated from their children right after delivery, causing aggravated postpartum depression and pausing risks on the child’s development.

Despite the multitude of problems, panelists were able to highlight different programs in various states that are aimed to better serving and improving the living conditions of women and girls in the system. For Example, in New York, JusticeHome is a community and home-based program that serves as an alternative to incarceration specifically designed to support women allowing them to stay in their communities instead of serving time in jail or prison. Massachusetts and Tennessee have introduced legislation that provides sentencing alternatives for primary caretakers of dependent children who have been convicted of nonviolent crimes.

While many important issues were discussed during the hearing, one thing that was not discussed at length was the treatment of girls in the juvenile justice and criminal justice systems, particularly girls of color. Even as states and the Federal government have taken steps to reform our juvenile and criminal justice systems, the experiences and needs of justice-involved girls is often overlooked. This led to the proportion of girls in the system to stagnate even as the total number of young people coming into contact with the system fell. Further, most girls who end up in the justice system are there for low-level offenses such as running away and truancy (behaviors that are often a response to trauma and violence). 85 percent of all girls committed in the juvenile justice system are there on nonviolent charges. 34 percent are imprisoned for technical violations and status offenses.

Congress has taken some steps to address the specific needs of justice-involved girls, such as including several provisions in the reauthorized Juvenile Justice and Delinquency Prevention Act related to the needs of girls. However, looking ahead, there is a continued need for additional reform to ensure the needs of system-involved women and girls are addressed, and that pathways into the system are being blocked. It is the very least vulnerable girls and women deserve.