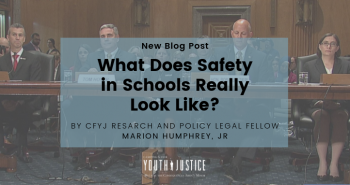 Considering the recent school shootings in El Paso, Texas, and Dayton, Ohio, of which the overwhelming majority of victims were Black and Latinx, this conversation is as needed as ever.  Schachter and Hoyer both lost their children to the shooting at Marjory Stoneman Douglas High and use their experiences with heartbreak to press for school safety measures. Schachter’s comments, while referring to a national tour he participated in, lauded principals around the country who shifted their school safety measures by implementing easy, low cost practices like door locks, access control, and cameras.  He promotes the National School Safety Best Practices agenda and seeks greater reporting of school violence nationwide.

Hoyer laid out a platform that focuses on securing school campuses, improving mental health screening and support programs, and supporting responsible gun ownership.  He made clear that, although his organization was supportive of gun ownership for school guardians, they were not supportive of language in Florida’s recently passed SB 7030 that allows for teachers to be armed with guns.  His focus on mental health programs centered on increasing the prevalence of threat assessments and reducing Health Insurance Portability and Accountability Act (HIPAA) and Family Educational Rights and Privacy Act (“FERPA”) regulations for law enforcement agencies to provide greater access to identifying at-risk youth.

But, these suggestions fall drastically short of real change and impact.

These assertions focused purely on methods that do little to reduce violence in schools.  Even after Temkin referred to data showing that most school shooters are either students of the schools, former students, or people affiliated with the schools, Chairman Ron Johnson (R-WI) still concluded that he was mostly concerned about quick, low cost measures, such as locks on every classroom door.  It is hard to reason that this is a viable solution for ending school shootings when the shooters know class schedules and the times at which students, faculty, and staff are roaming the campus.

There was also a conversation about increasing the number of school resource officers (SROs) and actual police, all armed, in schools. Senator  Rick Scott (R-FL) focused on this solution and called for having one officer in every school, mentioning last year’s Florida school safety bill that followed the Douglas High shooting.  Research this year regarding Florida’s policy shows that the introduction of more SROs and police into schools can lead to consequences such as an increase in suspensions for youth of color, thereby creating a  school-to-prison pipeline. Research has often shown that while youth of color are no more likely to misbehave than white youth, 70 percent of students involved in school-related arrests or referred to law enforcement are African-American or Hispanic.  In addition, Black girls are seven times more likely to be suspended than white girls.

Temkin also emphasized the potential disparate impact that security measures, such as increased number of SROs and police in schools, have on youth of color, LGBTQ youth, and students with disabilities.  She referred to research that shows how many of the schools that have suffered active shooting events since Columbine maintained many of these same security measures, and their effectiveness in preventing shooting deaths lacks assuredness.  Yet, shootings still continue to occur, and in mostly white, suburban areas.  Temkin added how studies show that policies, such as the threat assessments and reduced privacy in mental health screenings mentioned previously, could help law enforcement target youth who have experienced trauma as at-risk and could disportionately impact impoverished and abused youth of color.  Additionally, she discussed how activities like active shooter trainings could further traumatize youth.

Temkin encouraged the need to address the root causes of potential violence in schools, stating that building a positive school climate has a greater impact on violence than do attempts to increase purely security measures.  She referenced policies that invest in student skills-building and early childhood development, increase access to school- and community-based mental health supports, and that bolster community and family engagement as viable alternatives to simple safety measures that can have negative consequences for students of marginalized backgrounds.  Past policies she mentioned that supported healthy increases in safety for schools included the Safe Schools/Healthy Students initiative (1999) and Safe and Supportive Schools grant program (2010). Additionally, she also mentioned grant opportunities within the Every Student Succeeds Act (ESSA) through its Student Support and Academic Enrichment formula grant program.

Throughout the hearing, there seemed to be somewhat of a conflation between two related issues: mass shootings and episodes of student gun possession at schools.  Still, the conversation on guns was highly inadequate. According to the Chairman, gun-focused conversations are too political. Yet, when Sheriff Gualtieri was prompted to discuss the impact of Florida’s Red Flag Law, which helps to remove guns from people who demonstrate a threat, Gualtieri said that the law has been “extremely effective.”  No one else was given space to refer to gun control.

The hearing followed last Tuesday’s U.S. Commission on Civil Rights report release, entitled “Beyond Suspensions: Examining School Discipline Policies and Connections to the School-to-Prison Pipeline for Students of Color with Disabilities.”  It is estimated that an overwhelming “70 percent of youth who enter the justice system have a mental health, sensory or learning disability, and anywhere between 28 percent and 43 percent of detained or incarcerated youth have special education needs.”

Unsurprisingly, the report noted “that students of color with disabilities face exclusionary discipline pushing them into the school-to-prison pipeline at much higher rates than their peers without disabilities. And while exclusionary discipline has been shown to be harmful for the educational attainment of all students, students with disabilities, particularly those who are students of color, face even more challenges when they are not able to receive a quality education.”

At the Campaign for Youth Justice, we advocate for limiting youth interactions with the justice system, particularly the adult criminal justice system.  To do this, we must look at safety in a way that discontinues practices that criminalize our youth. Suggestions that fail to realize that additional supports youth need to succeed within any environment, but instead surveil, suspend, and arrest them, also fail to educate them and maintain safety in schools.