When They See Us Viewing and Panel Discussions 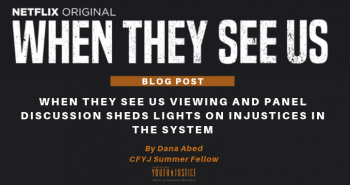 Last week, The Campaign for Youth Justice hosted a private viewing followed by a panel discussion of the Netflix Original series, “When They See Us”, Part IV. The series, produced by Ava DuVernay, is nothing short of a moving portrayal of the injustices that young people of color face regularly in the justice system. The series of four parts tells the story of the Central Park Five, the five boys who were unjustly incarcerated for raping and attempting to murder a woman in Central Park.

Through incredible cinematography and storytelling, the series highlights the importance of interrogating suspects in the presence of an adult, the unfairness of trying a 16 year old in the adult justice system, the difficulties of re-entry into society after release, the absurdity of solitary confinement, and the lack of rehabilitation and attention to mental illness in the system.

After the viewing of the episode, a panel discussion took place where Norman Brown, David Walliams, Cliff Yarborough, and Tyrone walker had the chance to share with an attentive audience their experiences as children and adults in the justice system. The panel, moderated by CFYJ CEO Marcy Mistrett, was a chance to raise awareness about real stories that happened with these men, and that are as petrifying as the stories in the series, hence bridging the TV scenes and the sad reality, reminding us that injustices in the systems are not just a Netflix storyline, but a struggle that our young men and women are facing, and that they are more prevalent than we would imagine.

I recall something that Cliff said and that resonated with me. When he was charged as an adult at 17 with 35 years in prison, Cliff said, “I did not cry, because I did not understand what I got.” If our kids do not understand the impact of their sentence, how can we expect them to learn from their mistakes and treat prison as a chance to revisit their actions and change for the better? The magnitudes of the decisions made by the justice system are far too heavy on the incarcerated youth.

Tyrone, who was also charged as an adult for a crime he committed at the age of 17, recalls his time at the adult facility saying that “the adult facility was like a madhouse, and you try to analyze the madness but you don’t really understand what’s going on.” Young people do not belong in adult facilities. It is not the right atmosphere for them to flourish or to even feel safe.”

David, who was also charged as an adult for a crime he committed at the age of 17, spoke of the unfairness of the system in evaluating your prison time. David was a student with a 3.95 GPA prior to his incarceration, and although he finished high school in prison, and showed progress, his parole committee only focused on his misdemeanors, and extended his sentence for three years. These types of stories are a huge demotivation to those who are trying to make progress while serving time.

Although stories as such are heartbreaking, it was incredibly inspiring to see those men now working towards justice reform, and helping other incarcerated youth and adults throughout their sentence and as they re-enter into society. Norman, who now works as a credible messenger with the DC’s Department of Youth Rehabilitation Services, explained through his job, he helps incarcerated citizens come back home with the right mindset and prepare incarcerated youth to go in the system and learn how to do time. “It’s very complicated, but we need to work on it from both ends,” he said.

Sharing people’s personal narratives is one way to raise awareness and shed light on stories that otherwise would go unnoticed. Hundreds of thousands of young men and women continue to suffer from the unfairness of the laws and institutionalized racism. What is particularly inspiring however is how those young men and women come out of the system focused on provoking change and extending a helping hand to others in the same situation.

We have uploaded a discussion guide for the show When They See Us and a guide on how to plan your own screening. Thank you to all those who came last week!