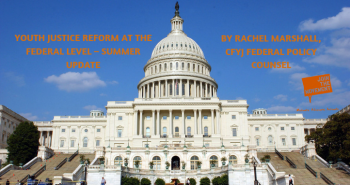 Congress’s summer break, known in D.C. as the “August recess,” is winding to an end, and a busy September awaits lawmakers when they return. Before they return, let’s take a look at the work the 116th Congress has accomplished for juvenile justice reform and related issues thus far:

Sure, the budget process may not be very exciting, but how Congress allocates funding for the upcoming fiscal year is going to be critical to the successful implementation of the reauthorization of the Juvenile Justice and Delinquency Prevention Act (JJDPA). Since the bill had last been reauthorized in 2002, funding for juvenile justice programs has decreased by nearly 50%. The Juvenile Justice Reform Act of 2018, which was signed into law at the end of the 115th Congress and reauthorizes the JJDPA, authorized Congress to appropriate $176 million for titles II and V of the law, and advocates have been working hard to educate Congress on the importance of fully funding the law at this level.

The new fiscal year begins September 30, and when the Senate returns, they will have to move all 12 appropriations bills. Given this short time frame, it is likely the House and Senate will have to pass a short term funding bill, known as a continuing resolution. In the meantime, we will be encouraging Senators to fully fund juvenile justice programs at authorizing levels, and we encourage you to do the same.

Building off the momentum of the passage of the Juvenile Justice Reform Act, we have seen several members introduce legislation to further reform our juvenile justice system and strengthen protections for young people.

In the Senate and House, we saw the introduction of the Next Step Act of 2019 (S. 697/H.R. 1893) from Sen. Corey Booker (D-NJ) and Rep. Bonnie Watson Coleman (D-NJ). This comprehensive criminal justice reform bill includes the REDEEM Act, which includes provisions on sealing and expungement of juvenile records; sealing of adult records; makes improvements to the ban on juvenile solitary confinement, which was passed as part of the First Step Act; and incentivizes states to pass similar laws by giving them priority consideration for COPS grants, including prioritization for states that establish age 18 as a floor for original jurisdiction in adult criminal courts. Rep. Elijah Cummings (D-MD) also introduced the REDEEM Act as a standalone bill (H.R. 2410).

Rep. Tony Cardenas (D-CA) introduced H.R. 2300, the Eliminating Debtor’s Prison for Kids Act of 2019. Across the country, youth, particularly youth of color, are doubly punished by our system with justice-related fines and fees. Youth and families who are unable to pay these fees often face extended probation or may even wind up incarcerated. Longer parole often means additional fees and trap young people in indefinite parole. Congressman Cardenas’s would incentivize states to follow in the footsteps of California and other jurisdictions to eliminate fines and fees for justice-involved youth and would provide grants for evidence-based and trauma-informed mental and behavioral health services to at-risk youth.

In May, Rep. Bruce Westerman (R-AR) introduced a package of sentencing reform bills for youth that recognize that children are different from adults and should be treated as such, particularly in our criminal justice system. H.R. 1949 addresses the use of mandatory minimum sentences on all children in the federal criminal justice system. Under this measure, judges will consider how children are different from adult offenders prior to sentencing and will be allowed to depart up to 35 percent away from the otherwise applicable mandatory minimum sentence. H.R. 1950, also known as Sara's Law, will allow judges to depart from any mandatory minimum sentence or suspend any portion of a sentence when a child has committed a crime against someone who has previously sex trafficked or sexually abused them. Finally, H.R. 1951 will allow children sentenced to more than 20 years in prison for crimes committed before their 18th birthday to petition the original sentencing court for review of their sentence after they have served 20 years of their sentence. This legislation will end life and de facto life without parole sentences for children and bring the federal government into compliance with the U.S. Supreme Court’s decisions in Graham v. Florida, Miller v. Alabama, and Montgomery v. Louisiana.

Sen. Brian Schatz (D-HI) has also introduced a series of bills to improve re-entry for returning citizens, including youth. His package of legislation includes the Restoring Education and Learning (REAL) Act (S. 1074), which restores Pell Grant eligibility to provide incarcerated individuals access to higher education and lower corrections spending; the Beyond the Box for Higher Education Act (S. 1338), which would provide colleges and universities with guidance and recommendations on the removal of criminal and juvenile justice questions from their initial application for admissions process; and the Promoting Reentry through Education in Prisons (PREP) Act (S. 1337), which would improve administrative efficiency and standardize educational programming in federal prisons.

In June, the House passed H.R. 6, the American Dream and Promise Act of 2019. While we strongly support the overall goals of the Dream Act and want to see a pathway to citizenship for young immigrants codified into law, the many conduct-based triggers that bar relief under the Act lead us to worry about the actual benefits for immigrant youth who come into contact with police and the juvenile legal system. The version of H.R. 6 that passed out of the House Judiciary Committee added many new - and unprecedented -  grounds of exclusion for people who apply for Dream Act relief, including discretionary bars for those who have juvenile delinquency adjudications, which are not convictions and should not carry the consequences of such, and those who the government labels as participating in gang offenses. We hope to continue to work with members of the House and Senate going forward to educate them on the critical intersection of immigration law with juvenile justice and criminal justice law.

In addition to the introduction of new legislation, there were several important hearings on the House side in July. First, the House Committee on Oversight and Reform held a hearing titled, “Identifying, Preventing, and Treating Childhood Trauma: A Pervasive Public Health Issue that Needs Greater Federal Attention.” We submitted a statement from the National Juvenile Justice and Delinquency Prevention Coalition (NJJDPC), which was entered into the record by Rep. Mark DeSaulnier (D-CA). Rep. DeSaulnier also shared how, in his own hometown, when they started to invest in evidenced-based prevention, youth incarceration rates dropped. In addition, both Rep. Ayanna Pressley (D-MA) and Rep. Debbie Wasserman Schultz (D-FL) discussed the intersection of childhood trauma and justice-involved youth.

The House Judiciary Subcommittee on Crime, Terrorism, and Homeland Security held a hearing titled, “Women and Girls in the Criminal Justice System.” NJJPDC also submitted a statement ahead of the hearing. While the focus was mainly on women, witnesses discusses how girls are more likely to be incarcerated for status offenses and other non-violent offenses. Further, witnesses noted how policy decisions in the criminal justice arena rarely take into consideration the trauma and violence experience by most justice-involved girls and women.

While we’ve seen a lot of great pieces of legislation introduced in the last few months, the bills have not progressed in the legislative process. While Congress will be busy in the fall ensuring the government is funded, we hope they also take the opportunity to move additional legislation and continue to hold hearings on these issues. It is also important to note that the beginning of the new fiscal year, October 1, 2019, is when many of the new requirements under the reauthorized JJDPA will take effect, and Congress will need to exercise its oversight authority to ensure the law is being implemented in good faith by the Office of Juvenile Justice and Delinquency Prevention.

Before Congress heads back to D.C., it’s not too late for you to contact your members while they’re home and ask them to support the legislation mentioned above. You can learn more about how to set up meetings in this toolkit from our partners at the Coalition for Juvenile Justice. And make sure to check back on our website for updates throughout the year!