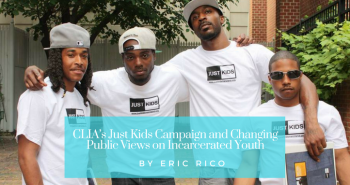 For our fourth and final event in our Summer Guest Speaker Series, we had the opportunity to speak with Sarah Wall, the Government Relations Manager for the Just Kids Campaign at CLIA (Community Law in Action). CLIA’s Just Kids Campaign was formed in 2010 as an advocacy group made up of youth and adult partners who are devoted to ending the automatic prosecution of youth as adults in Maryland. The youth leaders generally range from 16-24 year-olds and have been involved in the justice system and charged as adults. The campaign provides educational and job opportunities that benefit youth, such as life skills training, ex-offender employment, and GED programs. Although these programs are important, one of the most crucial aspects of the campaign is that is allows these youth leaders to be effective advocates in the process of ending youth transfer. These young leaders are given a platform to meet with legislators, conduct public outreach, and share their stories, working to change public attitudes towards youth who are charged (or treated) as adults.

Unfortunately, one of the toughest obstacles that the movement to end youth transfer faces is changing public perception towards juvenile crime, especially in Baltimore. Although the city does face issues regarding urban poverty, poor education, overpoliced communities, and the crimes usually associated with these problems, the media has played a large role in characterizing Baltimore as a dangerous place. This narrative, and in some cases sensationalization of crime, has molded a “tough on crime” public attitude in the rest of Maryland. Children are no exception to this harsh public perception. In response to news stories, many readers have left comments online referring to kids as “pieces of filth,” recommending decades-long sentences, and even suggesting lynching children who were charged with crimes. Many of these public reactions are laced with racial discrimination, thanks partially to the media’s sensationalization of crime in black neighborhoods.

Unfortunately, legislators implement this rigid attitude into state law and policies, and children suffer subsequently. Currently, youth ranging from 14-17 years old can be automatically transferred into the adult system for 33 different crimes. If convicted, youth will serve their sentences in adult facilities where they are exposed to countless dangers and vulnerabilities. Youth are subjected to increased violence in adult facilities and are deprived of certain educational and rehabilitative programs that are only available in juvenile detention centers. Instead of being allowed to learn from their mistakes, they are charged as adults with harsher sentences that make recidivism more likely.

Luckily, the Just Kids Campaign helps to overcome this obstacle and educate the public on how ineffective and damaging youth transfer can be. The campaign leaders are reaching out to the public to provide different and more personal perspectives on youth transfer. Youth leaders argue that juvenile facilities are more suitable because they offer programs that allow for successful reintegration and decrease the likelihood of recidivism. If the ultimate goal is to make the state of Maryland a safer place, it seems logical to implement the best mechanisms that allow incarcerated individuals to positively contribute to their communities upon release, especially youth.

Although overcoming these perceptions molded by media is no easy task, the Just Kids Campaign and similar advocacy groups have already had some success. In 2015, state legislators passed a bill that require youth to be held in Department of Juvenile Services facilities prior to a transfer hearing (with some exceptions). Some of their current campaigns focus on ending automatic transfer for certain crimes such as armed robbery, first-degree assault, and handgun offenses; advocating for a “shielding bill” that would seal youth’s records until the time of a transfer hearing; and supporting a bill that will require cases to start in juvenile court if the youth was not a principal actor in a group offense. Youth leaders are also currently advocating against a “gang bill” which would automatically transfer youth into the adult system if charged with gang offenses. This bill is particularly dangerous as it broadly defines a gang as a “pre-existing establishment of 3 or more people.”

Although we have a long way to go in ending youth transfer, CLIA and the Just Kids Campaign are leading by example and are playing an integral role in accomplishing this goal.