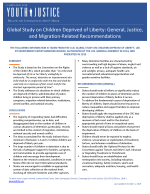 The following information is taken from the U.N. Global Study on Children Deprived of Liberty, led by Independent Expert Manfred Nowak, authorized by the United Nations General Assembly in 2014, and presented in October 2019.

U.S. Fifth Periodic Report to the U.N. Human Rights Committee on Compliance with the International Covenant on Civil and Political Rights (2019) 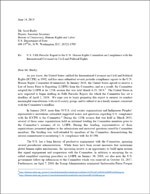 In January 2018, the United States agreed to receive a List of Issues Prior to Reporting (LOIPR) from the U.N. Human Rights Committee regarding compliance with the International Covenant on Civil and Political Rights , and as a result, the Committee adopted the LOIPR at its 125th session that was held March 4-29, 2019. The United States is now expected to begin drafting its Fifth Periodic Report, for which the Committee has set a deadline of April 2, 2020. This sign-on letter urges the U.S. to begin preparing this report in earnest, to conduct meaningful consultations with civil society groups and to submit it in a timely manner consistent with the Committee’s deadline. 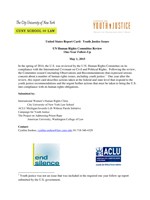 In the spring of 2014, the U.S. was reviewed by the U.N. Human Rights Committee on its compliance with the International Covenant on Civil and Political Rights. Following the review, the Committee issued Concluding Observations and Recommendations that expressed serious concern about a number of human rights issues, including youth justice.1 One year after the review, this report card describes actions taken at the federal and state level that respond to the youth justice recommendations and the urgent further actions that must be taken to bring the U.S. into compliance with its human rights obligations. 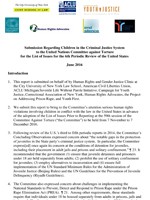 In violation of international law, all 50 U.S. states allow or require that children in conflict with the law be tried as adults in certain circumstances. Approximately 200,000 children are tried as adults each year and the majority of these children are transferred or excluded from juvenile proceedings without any hearing or individualized consideration of their circumstances, individual maturity or culpability. 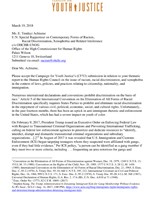 Numerous international declarations and conventions prohibit discrimination on the basis of race.1 Article 5 of the International Convention on the Elimination of All Forms of Racial Discrimination specifically requires States Parties to prohibit and eliminate racial discrimination in the enjoyment of various civil, political, economic, social, and cultural rights. Unfortunately, in the past fourteen months, there has been an uptick in anti-immigrant rhetoric and enforcement in the United States, which has had a severe impact on youth of color.