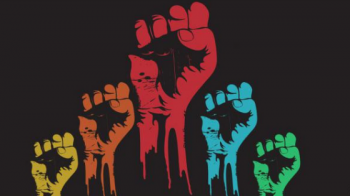 December 10 marks the 70th anniversary of the signing of the Universal Declaration of Human Rights (UDHR), the foundational document of the post-World War II human rights system. Coming in December, it represents a chance to reflect on how human rights were respected (or not) during the course of the year.

This year, it is safe to say, has not been a good one for human rights, either in the United States or worldwide. For children and youth in particular, it has been a rough year.

For starters, this year saw the implementation in the U.S. of the infamous “family separation” policy, in which thousands of children of immigrants were forcibly taken from their loved ones and detained in cages. As of mid-November, more than 14,000 children were in detention, now mostly children who came to the U.S. unaccompanied.

Globally, the strains of migration and war continued to take a steep toll on children and youth. In November, for example, the New York Times reported that 85,000 children under the age of five may have died of starvation in Yemen since 2015.

The February mass shooting at Stoneman Douglas High School in Parkland, Florida (in which 17 people were killed), was another low point this year, but it galvanized hundreds of thousands to participate on March 24 in the March for Our Lives that called for doing something about this ongoing violence against children, against which children have every right to expect protection. In the U.S., guns are the second leading cause of death for children (after car accidents); from 2006-2016, over 22,000 children ages 1-19 have been killed by firearms (compared to about 19,000 who succumbed to cancer).

The emergence of this movement was not the only bright spot in an otherwise dismal year for the human rights of children and youth in the U.S. At the state and local level, progress continued to be made in reducing the number of children dumped into the adult criminal justice system, where irreparable harm to them and to their futures is the most likely result.

The belief that some children are irredeemable and must be tried as adults remains strong, but it has become at least more narrowly focused. This is good news in terms of raw numbers. From a high of around 250,000 children tried as adults each year, we now see less than 100,000 annually.

The bad news is that the sharper focus on fewer irredeemable children (those considered to be “violent”) has proven to be inextricably linked with racism. As the number of children charged as adults has declined, racial disparities have risen. Addressing this will be essential for the U.S. to make real progress in respecting the human rights of its children.

This October, Inter-American Commission on Human Rights issued a comprehensive report on children in the adult criminal justice system in the U.S., demonstrating that attempts at international oversight of the rights of children in the U.S. do exist. As this report makes clear, reforms that reduce the transfer of children to the adult court, or keep children out of adult jails, are human rights reforms, even if the rhetoric of “human rights” is not used by wary U.S. politicians or advocates.

Another assessment of children’s rights will be released next October, when United Nations Independent Expert Manfred Nowak publishes a Global Study on Children Deprived of Liberty, cataloging worldwide the incarceration or detention of children for criminal justice and other purposes. The United States sadly is a major practitioner in depriving children of liberty, so this represents another chance to put U.S. youth justice practices under a human rights microscope. (Though the deadlines have passed, information can still be submitted for the study here.)

Not coincidentally, next year will also mark the 30th anniversary of the enactment of the UN Convention of the Rights of the Child (CRC), the most widely ratified of all the UN human rights treaties that have been established to give substance to the broad pronouncements of the UDHR. Shamefully, the U.S. remains the only country in the world that has not ratified this treaty, despite having been deeply involved under President Reagan in its creation.

Anyone familiar with the make-up of the current U.S. Senate knows that ratification of this treaty is not coming anytime soon. But despite the widespread hostility to the concept of human rights that persists in the United States, the rights of U.S. children are indeed “human rights”. These include their right to be free from pernicious racism and discrimination, their right to be kept safe from gunfire and violence, their right to not be locked up with or without their families, and, most fundamentally, their right to be treated as children.

As this year has made clear, respecting and advancing these rights will continue to be an uphill battle.