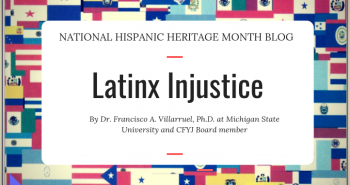 In recognition of Hispanic Heritage Month, the Campaign for Youth Justice is supporting a series on the impact of federal and state youth justice policies and practices and their disparate impact on Latinx families.

Our first blog is written by Dr. Francisco A. Villarruel, Ph.D. at Michigan State University and CFYJ Board member.

For over two decades, advocates, community based practitioners, families, and researchers have challenged the Department of Justice to consider modifying data on the number of Latinx youth that spend part of their adolescence with juvenile justice systems. While some might consider this an inconsequential and unimportant issue, the failure to better understand the diversity of Latinx youth has serious implications. One assumption, for example, is that immigrant youth (those born outside of the U.S. or those that come early in their lives) are more likely to be involved with the juvenile justice system. Yet, there is no reliable way to substantiate or refute this claim. Research shows that immigrant adults are less likely to violate public laws – why do we assume this would be any different for children? Do we know whether generational status impacts involvement with juvenile justice systems? Evidence suggests yes, but most of the work to date has focused on only those that have recently immigrated with those that have not.

A critical leverage point in juvenile justice programs is family involvement. Without data on individual and family characteristics, is it safe to assume that monolingual (i.e., English-language based programs) are the gold standard in terms of positive outcomes? How can practitioners communicate with parents when English is not the primary language?  While there is some research that shows evidenced based programs (e.g. Family Functional Therapy (FFT), or Multi-systemic Family Therapy (MFT)) have been used effectively with Latinx families and youth there remain barriers to implementation at a large scale, including the disinvestment of resources in communities of color, and the ways these services are introduced to a community.   However, early research has shown that additional evidence-based programs that are community- based and led are equally effective in their outcomes and delivered in culturally appropriate ways. For example, La Plazita Institute  in New Mexico is designed around the philosophy of “La Cultura Cura” or culture heals, La Plazita’s programs engages New Mexico’s youth, elders and communities to draw from their own roots and histories to express core traditional values of respect, honor, love, and family.  Barrios Unidos in Santa Cruz, CA, promotes multicultural social justice, nonviolence and economic equity through cultural healing, civic leadership and youth and community development. A third example of an evidenced based approach is Jovenes Nobles, a youth leadership development program that supports and guides youth through their "rites of passage" process while focusing on the prevention of substance abuse, teen pregnancy, relationship violence, gang violence and school failure. This program was developed through community and culturally based elders affiliated with the National Compadres Network in California.

Similarly, there is little recognition at the federal level that not all Latinx families are the same. Families from Mexico have cultural mores and practices that are not identical to those from the Caribbean (e.g., Cuban, Dominican, Puerto Rican), Central American (e.g., Guatemalan, Honduran, Panamanian, El Salvadoran), or South American (e.g., Argentinian, Peruvian, Venezuelan). Furthermore, we must acknowledge that some Latinx families have lived on the lands of the continental U.S. long before these lands were admitted into the Union – yet we perceive all Latinx to be the same? With populations from thirty-three recognized nations, practitioners understand that cultural adaptive and normed approaches are needed – Without research that delves into these questions and data points we could be missing critical community-based interventions that are highly effective in supporting youth outside of the justice system.

Sadly, we know that under the current administration, many of our Latinx children are being criminalized as they flee their home countries seeking asylum.  Since the signing of an executive order to separate undocumented immigrant children and youth from their families in June, and the challenges of providing care for these children, even after the executive order was reversed, the federal government has turned to the imprisonment of these children in both juvenile and adult jails.  While in previous years these children and families would be released to the least restrictive environment while their asylum cases were pending, they are now placed, all too frequently in secure family detention or in adult and youth correctional facilities.

As a result, youth (and their families) have become more reluctant to access anything sponsored by government for fear of separation from their families or, worse yet, repatriation. Youth who arrive to the United States as unaccompanied minors or with their families are now placed in Office of Refugee Resettlement (ORR) funded centers or in immigration detention.  Often, they are transferred by ICE – at night – to adult jails on their 18th birthday.  We must remember that these youth were in detention on JUST immigration holds— including those who have made legal requests for asylum. More recently, the administration has sought to overturn the Flores Agreement that provides minimum standards of care for those youth while they are in custody (both with families or individually). All outcomes show that children do better in the least restrictive environment with families.  But without proper data collection and research, these children languish for weeks and months in secure detention.

These issues beg a simple question: If all youth matter, why are investments in effective practices and policies that can help promote youth well-being and address the individual needs that children in conflict with the law experience being redirected or ‘hardened’ to eliminate needed supports and services, especially for Latinx youth?