Lifting the Voiceless: Raising Awareness for Girls in the Juvenile Justice System 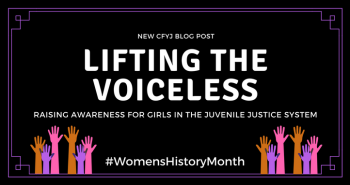 March is a time to reflect on the great contributions of women to our society, but we will be remiss if we didn't take some time to think about those voiceless young women and girls that are incarcerated.

Additionally, girls of color are more likely to end up in the juvenile justice system for acting out behavior than their white peers. African-Americans girls constitute 14 percent of the general youth population nationally, but one-third of the girls who are incarcerated. Native Americans girls are one percent of the general youth population, but are up to 4 percent of girls incarcerated. Latina girls are confined at a rate of 47 per 100,000, compared to 37 per 100,000 of non-Hispanic white girls. Many times, young girls are incarcerated for behaviors that aren’t even criminal such as running away from home or breaking curfew, in addition to prostitution, in a misguided attempt by the Courts to make sure they are “protected.” This is a failed approach that makes young girls more, not less, vulnerable to harm.

According to Detention Reform and Girls, a 2005 report from the Annie E. Casey foundation, an increasing number of girls are being arrested for minor offenses and spending more time —sometimes nearly twice as long — in detention relative to their male counterparts. For girls, these experiences can reignite trauma. Instead of addressing these problems, the process and experience of detention ignores the causal factors for these minor offenses and further exacerbate pre-existing trauma.

Moreover, girls are likelier than boys to be arrested for status offenses and often receive more severe punishment than boys. This highlights the subliminal gender inequality that differentiates the experiences of boys and girls in the criminal justice system to the detriment of girls.