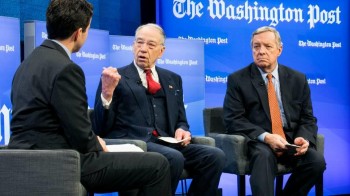 The Washington Post held a live discussion event where key elected officials and advocates came to discuss the future of the First Step Act. The widely discussed bipartisan criminal justice reform bill, with its future in question.was discussed by heavy-hitters trying to get a vote on this bill before the end of session.  Key speakers at this event included: Sens. Dick Durbin (D-IL), Chuck Grassley (R-IA), Mike Lee (R-UT), Gov. Tom Wolf (D-PA); Larry Leiser, President of the National Association of Assistant United States Attorneys; Secretary of the Pennsylvania Department of Corrections John Wetzel; and Rep. Sheryl Delozier, a Republican member of the Pennsylvania House of Representatives. Larry Leiser was the only dissenter at the event--arguing that First Step would diminish public safety, a position that was challenged by the rest of the panelists.

As a collective, advocates in the youth justice reform space were already disappointed that the First Step Act does not include provisions that would bring federal sentencing in line with several U.S. Supreme Court cases that call for an end to mandatory juvenile life without parole sentences. Not only does First Step fall short in protecting youth (it does include the end of youth solitary in the federal system, a largely symbolic, but important message, as the Federal Bureau of Prisons contracts out any juvenile offenders under age 18 to state-based facilities), but the event largely failed to mention anything about the passage of the JJDPA. Despite the fact that juvenile justice reform also has broad bipartisan support, it was not a focus or topic that any of the panels covered in-depth.

First enacted in 1974, the Juvenile Justice and Delinquency Prevention Act (JJDPA) has been due for reauthorization since 2007, advocates have been pushing ever since to have the act reauthorized to no avail just yet. The reauthorization of the JJDPA was not a topic mentioned by Senator Grassley, although he was an original co sponsor of the bill and has championed its passage over the past two congresses.  The only bright moment for the JJDPA, was when Jason Pye, Vice President of Legislative Affairs for FreedomWorks, boldly stated “we would like to see more stuff done on Juvenile Justice like the Redeem Act, [we] want to see things like the JJDPA reauthorization finally passed!” Mr. Pye’s statement regarding JJDPA garnered one of the loudest cheering moments from the crowd in attendance.

While the event seems to have fallen short in convincing Leader Mitch McConnell that First Step is worth a floor vote this session, it has led to some vocal opposition from constituents who previously supported the Sentencing Reform & Corrections Act passed by the Senate last year. On December 7th, Roy Austin, former deputy assistant to the president for urban affairs, justice & opportunity penned an op-ed opposing First Step; and on December 10th, the National Council of the Churches came out in opposition of the Act, breaking from the Evangelicals who have loudly supported this bill.

As youth justice advocates, we are hoping that the new members of Congress resume this fight, and include meaningful reform for our federal prisoners, including those who were sentenced as children to adult, federal time.