2019 Legislation on Youth Prosecuted As Adults in the States 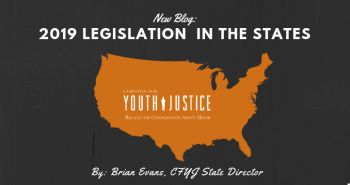 We have made it through the first month of 2019, and most state legislative sessions are now in full swing. As of January 31, and as in years past, proposals relating to youth prosecuted as adults are mostly, though by no means entirely, positive. Meaning that most states are trying to limit or stop the placement of youth in adult courts, jails, and prisons.  Here at CFYJ we are producing a weekly roundup on legislation related to youth prosecuted as adults, which you should check out and bookmark for future reference.

Legislation has been filed in Texas, and will soon to be filed in Michigan, to raise the age of juvenile  court jurisdiction to include 17-year-olds. Similar legislation passed the Texas House in 2017 (the most recent Texas legislative session), and passed a House Committee in Michigan towards the end of last year, so the prospects this time around are fairly good. The other two states that have not yet raised the age - Georgia and Wisconsin - may see legislation as well.

We are also seeing legislative interest again this year in raising the age above 18.  Last year, Vermont became the first state to pass legislation to raise the age of juvenile court jurisdiction beyond 18 by 2022.  This year, Connecticut,  Massachusetts, Illinois and Arizona have bills in to expand their juvenile court jurisdiction and Colorado has a bill to study the issue.

Importantly, we are seeing proposals for “racial impact statements” in more states - including the traditionally conservative states of Kentucky and Oklahoma. Racial impact statements require that legislative proposals that create new crimes or could impact the sentencing, incarceration, or parole of youth and adults are analyzed to determine its likely impact on racial disparities. Racial disparities are rife throughout the youth (and adult) criminal justice system in the United States, and these impact statements could help ensure that reforms don’t just reduce numbers but address the underlying racism that we know is inherent in every state’s justice system.

Several states have legislative proposals to protect children from being incarcerated with adults, including Arizona, Montana, North Dakota, and South Carolina.

Legislators in Florida and Mississippi are looking at bills to raise the minimum age at which some children (depending on the offense and the method of transfer) can be sent to the adult system.  In addition, some states are looking at restricting the use of solitary confinement for youth, and limiting mandatory minimums for children tried as adults.

Unfortunately, not all of the proposed legislation is positive for youth.

Most troubling is proposed legislation to repeal Connecticut’s Raise the Age law. Almost a decade ago, Connecticut raised the age from 16 to 18, and the change has been a success, with continuing drops in crime rates at much less expense than was anticipated. This proposal is one of several that appear to be intended to roll back Connecticut’s important youth justice reforms and bring back the widely discredited “tough-on-crime” policies that fueled mass-incarceration.

While most state legislatures, continue to move in the right direction, some are testing the public’s appetite to return to mass-incarceration policies.  We encourage our supporters to find out what bills are being introduced in your state by checking out our weekly roundup and sending your legislators a message that you support treating youth as youth and keeping them out of adult courts, jails, and prisons.