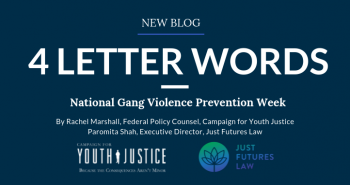 As children, we all learn that there are certain words that are not polite or nice to say. Coincidentally, a lot of these forbidden words are four letters long. But what about the word gang? Was that ever a four letter word you weren’t allowed to use? If you are to believe the media and certain politicians, it’s certainly a word that should illicit fear, and one you would never want to be associated with.

But what exactly is a gang? According to the federal government, a gang is:

The National Youth Gang Survey, conducted by the National Gang Center, has a far more ambiguous definition. The Survey defines a youth gang simply as “a group of youth or young adults [the responding agency is] willing to identify as ‘gang.’”

Broad definitions like these give law enforcement agencies a license for abuse because so much “activity” can be labeled as gang activity. Because labels inevitably lead to profiling, we have seen an increased targeting of youth of color, including immigrant youth, for alleged gang involvement. Per Immigration and Customs Enforcement (“ICE”) policy, “a person can be identified as a gang member if they meet two or more criteria, including . . . frequenting an area notorious for gangs and wearing gang apparel.” A policy of being targeted by law enforcement for simply wearing a particular soccer jersey or doodling the area code of your home country is simply another face of “broken windows policing,” – policing that is aimed at bringing youth into our carceral system.

In keeping with renewed efforts to target Black and brown youth, we have seen the focus of federal funding shift to law enforcement-focused suppression. The Office of Juvenile Justice and Delinquency Prevention claims to support a comprehensive approach to gangs and gang violence, yet the majority of the $8 million in grants devoted to youth gangs in Fiscal Year 2018 went to two grants, one titled “Gang Suppression: A Law Enforcement and Prosecutorial Approach to Address Gang Recruitment of Unaccompanied Children” (this despite the fact that less than 0.1 percent of unaccompanied children who have entered the country are suspected or confirmed as being a member of MS-13) and one titled “Gang Suppression Planning Grants Program.”

But is it gang participation that we’re really worried about? Here are some fresh thoughts to a tired law enforcement narrative on gang violence:

As we mark National Gang Violence Prevention Week, we challenge you to confront that four letter word. Perhaps it’s not as insidious as politicians would have us believe.