Girls of Color and the Criminalization of Trafficking Survivors 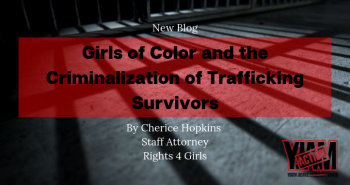 This Youth Justice Action Month as families, advocates, and communities participate in acts to end racism and the over-criminalization of young people of color, it is crucial that our efforts intentionally and explicitly uplift the voices and experiences of girls touched by the juvenile justice system. Similar to boys of color, girls of color are disproportionately pushed into the juvenile justice system. In fact, girls of color account for 22% of the youth population, but 66% of incarcerated girls. However, girls’ experiences in the system are distinct from boys, as are the reasons they are pushed into the system. Girls enter the system through pathways that are directly tied to their experiences of interpersonal violence and trauma—a process we call the Abuse to Prison Pipeline. A particularly troubling example of the Abuse to Prison Pipeline is the continued criminalization of child sex trafficking survivors.

Sex trafficking occurs whenever someone under the age of 18 exchanges sex for anything of value (e.g., food, clothing, or shelter). Girls of color are disproportionately trafficked for sex. For example, in Louisiana though Black girls compromise only 19% of the state’s youth population, they account for 49% of child sex trafficking survivors. The targeting of girls of color occurs even in locations where people of color comprise a small percentage of the population such as King County, Washington. In King County, Black girls are approximately 1% of the general population, yet 52% of child sex trafficking survivors are Black and 84% are female.  Many of these young survivors have prior histories of sexual abuse, child welfare involvement, dislocation from school, and being a runaway or homeless youth—characteristics which girls of color disproportionately experience and which are also factors that increase their risk of being funneled into the justice system.

In other words, these youth are incredibly vulnerable.

Yet, despite the care these girls need and the exploitation they’ve suffered, child sex trafficking survivors are arrested for the very harm inflicted upon them. Under federal law children are legally incapable of consenting to sex but not all states have followed suit. There are states that arrest children on prostitution charges—literally arresting children for their own victimization. Girls of color, particularly Black girls, bear the brunt of these arrests.  In 2017, Black children accounted for 52% of juvenile prostitution arrests and girls accounted for 61% of prostitution arrests. In many cases, these arrests occur within hours after they are sexually abused by sex buyers. Girls are often arrested on other offenses that are a direct result of their being trafficked, including running away, missing school and curfew violations.

Failure to treat these children as survivors of violence means not only are they left without support to properly cope with and heal from their trauma, they are pushed into a system where they will be exposed to conditions (e.g., being handcuffed, searched, and confined) that exacerbate trauma, especially that caused by sexual violence. They also have to overcome the collateral consequences of their system involvement—disrupted education, difficulty securing safe housing, etc.—which often compound the problems that left them vulnerable to being trafficked to begin with.

In 2017, the criminalization of trafficking survivors received national attention when Cyntoia Brown’s case went viral. Cyntoia is a child sex trafficking survivor who was sentenced to life for protecting herself from a buyer. Over the past couple of years, people across the country rallied in support of Cyntoia and, along with her legal team, advocated for her to receive clemency. In August, Cyntoia was released on parole after serving 15 years behind bars. While her release was a great success there are many more girls like Cyntoia, particularly girls of color, embroiled in the justice system for a range of behaviors stemming from their trafficking. It is critical that we show up and speak up for them just as we did for Cyntoia.

The criminalization of child sex trafficking survivors underscores the fact that to effectively confront racial disparities in our justice system, we must have an intersectional approach that applies both a gender and racial lens. To do otherwise overlooks the unique forms of injustice girls of color experience and perpetuates practices and attitudes that render them invisible.  For our girls, confronting racism means ending their adultification, their hypersexualization and busting myths about them that contribute to a narrative that allows them to be criminalized when they are victimized.