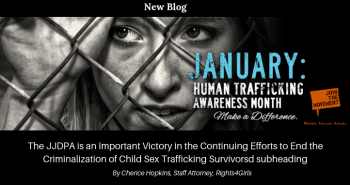 January is Human Trafficking Awareness Month and anti-sex trafficking advocates and juvenile justice advocates have mutual cause to celebrate—the reauthorization of the Juvenile Justice and Delinquency Prevention Act (JJDPA) after 16 years. Before the Act was signed into law last December, it had not been updated since 2002. During that span of time, much knowledge was gained about youth development and best practices for youth safety and treatment. Likewise, the past decade and a half has seen an increase in the understanding of the prevalence and harms of domestic child sex trafficking, including a growing awareness of the need to end our nation’s carceral response to these young survivors of violence. The updated JJDPA plays a critical role in ensuring that this important knowledge is incorporated into our juvenile justice policies and practices, including those that impact trafficking survivors.

It was not until 2005, three years after the JJDPA’s 2002 reauthorization, that federal laws recognized that children in the United States could be victims of child sex trafficking. Historically, these children—particularly girls of color—were not treated as victims of serious crime but were instead deemed complicit in their own victimization. As awareness about child sex trafficking has grown, so too has the understanding that child sex trafficking survivors cannot consent to their own abuse and, therefore, should not be held responsible for crimes related to their trafficking. This understanding has led an increasing number of states to adopt laws that shift legal responses from criminalizing child trafficking victims, to treating them as survivors of child abuse in need of services.

However, there are still states in which youth continue to be arrested on prostitution charges though they are often legally too young to consent to sex. Even when children are protected from prosecution for prostitution offenses, trafficking survivors can still be pushed into the system on other charges (e.g., running away, loitering, curfew and truancy) that are directly tied to their being trafficked.

The updated JJDPA now includes provisions that will help continue to shift states’ responses to trafficking survivors from criminalization to the delivery of services and support. Specifically, the law:

Additionally, we know that justice system involvement can be traumatic for youth. This is especially true for sex trafficking survivors for whom the conditions of confinement can be triggering. The JJDPA now prohibits the shackling of pregnant girls, addressing a particularly harmful source of trauma within the system. The inclusion of these provisions in the JJDPA is an important victory in the continuing efforts to end the criminalization of child sex trafficking survivors.