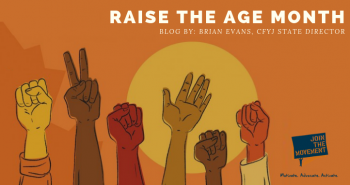 It started on the last day of February, when Wisconsin Governor Tony Evers announced his intention to “Raise the Age” of adult court jurisdiction to 18 as part of his executive budget. By mid-March, all four states that have yet to pass such “Raise the Age” legislation had taken significant actions towards doing so.

In addition, on March 1, the “Raise the Age” law recently passed in Louisiana went into effect for 17-year-olds accused of non-violent offenses. And on March 12, the Missouri Children and Families Committee heard HB 953, a bill that creates an implementation committee for the “Raise the Age” that passed there just last year.

The Michigan “Raise the Age’ bills seem most likely to pass; they bring with them a momentum that began building at the end of last year. In Georgia, by contrast, it has already been suggested that HB 440 will not get serious consideration until next year.

Texas and Wisconsin both face the challenge of raising the age of adult court jurisdiction from 17 to 18 while also dealing with seriously dysfunctional juvenile prisons. In Wisconsin Governor Evers, a newly elected Democrat, has suggested delaying the shuttering of that state’s troubled Lincoln Hills facility in order to focus on first raising the age. The Republican controlled legislation seems decidedly unenthusiastic about this approach. In Texas, violent incidents at two different juvenile prisons have led some officials to the opposite conclusion – that the juvenile prison question needs to be solved before raising the age.

Wisconsin is looking at creating smaller facilities closer to the homes of children committed to secure confinement, but should be looking very hard at establishing community-based alternatives so that fewer children will need to be locked up at all.

In Texas, while advocates call for smaller, closer to home facilities and community-based alternatives to incarceration, the powerful chair of the Senate Judiciary Committee continues to try to lock up more children with adults, most recently calling for over 800 children currently in the state’s juvenile prisons to be herded together in a recently closed jail. This is a stupendously bad idea.

Whatever the solution to ending the use of large remote juvenile prisons in Texas and Wisconsin, it can and should be done concurrently with implementation of “Raise the Age” legislation. Enacting multiple reforms simultaneously makes more sense than initiating two separate rounds of reform. And doing it all now is better for the children that are enduring abusive juvenile prisons and for all the 17-year-olds currently being subjected to the adult criminal justice system.

Whether either Texas or Wisconsin adopts this responsible approach remains to be seen.