Girls in Justice: A Thought-Provoking Glimpse of Girls in the System 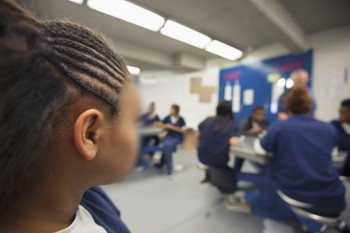 “I have interviewed and photographed children in confinement for the better part of a decade. As I sit on the floor of a cell and listen, each story, each child tells is enlightening, but the stories of the girls stir a special compassion.”

This is how Richard Ross, Professor of art at the University of California - Santa Barbara prefaces his newest book Girls in Justice.

With powerful images and first-hand accounts from over 250 detention facilities across the nation, Girls in Justice captures life behind bars and the physical, emotional and mental effects on young women in the criminal justice system. The evocative imagery alludes to the causes of trauma – sexual abuse, drug usage and forced prostitution to name a few – that many young girls in prisons face long before coming into contact with the system, and shocks the reader into questioning the criminal justice system today and its failure to address the underlying causes of delinquent behavior in girls.

The book highlights a harsh reality: girls in custody report nearly two times the rate of past physical abuse, two times the rate of past suicide attempts, and four times the rate of prior sex abuse as boys. In the process, it forces the reader to ask him or herself “what message is the criminal justice system sending to young girls today? Is it helping or further exacerbating the problem?” Ross seems to think the latter. “These girls in detention and commitment facilities are further abused by an organized system that can’t recognize or respond to their history and their needs,” Ross writes.

Girls in Justice is out this month. To order and for more information, visit here.