Kavanaugh Hearings: Justice Kennedy Was a Voice of Reason on Youth Justice, Now What? 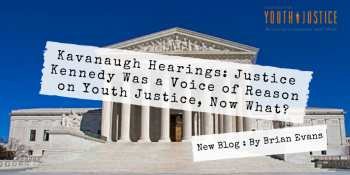 One of the legacies of Justice Anthony Kennedy’s tenure at the U.S. Supreme Court will be his central role in recognizing that, for the purposes of criminal justice, “children are different” and should be treated differently than adults

Basing his arguments on an emerging consensus in adolescent neuroscience and development, a consensus that continues to strengthen, Kennedy was a decisive voice in decisions that protected children from the harshest punishments applied to adults.

Reasoning that children are inherently less culpable and more amenable to rehabilitation that adults, he played a leadership role in limiting the use of life without parole and ending the use of the death penalty for juveniles.

The views of his appointed replacement, Judge Brett Kavanaugh, on these questions are, like much else in his record, unknown.

This is not acceptable.

Understanding where Judge Kavanaugh stands on the issues with which his predecessor was so strongly identified is critical for those tasked with voting up or down on his nomination. They are not going to gain such an understanding in the rushed confirmation process now getting underway.

For the rest of us who will have to live with the consequences of future Supreme Court decisions, particularly for children and their families caught in the justice system, this is just one more reason to slow things down.

Since 2005, many states have made meaningful strides in establishing laws that respect that “children are different” and that focus on rehabilitation as opposed to harsh or excessive  punishments. Many states have banned life without parole for juveniles, reduced transfer of children to the adult court, and/or raised the age of adult criminal responsibility to 18 (or in Vermont’s case, beyond).

But at the national level, the dehumanization and criminalization of children, particularly immigrant children, has reached a fever pitch, tapping into a racist, fear-driven, “tough on crime” ethos that has not gone away and continues to exist in every corner of our country.

Justice Kennedy was on the right side of votes that began to pull our country away from the harmful mass criminalization of youth that reached its apex in the 1990s. With him gone, his successor will be crucial in determining whether we continue to move in that positive direction, supported by science and public safety outcomes, or if these decisions will remain with other players in the justice system (prosecutors, sheriffs, and/or state legislatures). .

In what direction would a Justice Kavanaugh take us?

With the limited information currently available on him, we have no idea, and with the confirmation process already in motion, we are unlikely to find out until it is too late.