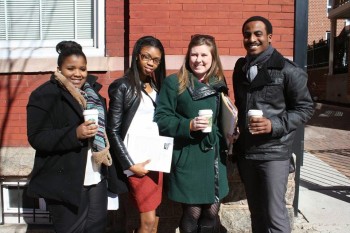 Last week, Just Kids Partnership wrapped up its legislative session, passing two reforms that help youth charged as adults in Maryland. After a quick 90 day session, Maryland advocates built on the momentum from the 2013 legislative session, by getting two bills passed based on recommendations from the Task Force on Juvenile Court Jurisdiction which studied the issue of charging youth as adults in Maryland last year.

On April 12, Just Kids advocates attended the Governor's signing of SB515/HB1295. Adding another win for Maryland youth. The bill allows youth who have been previously charged as adults but transferred back to the juvenile court and then adjudicated delinquent, the opportunity to ask for a transfer hearing back to juvenile court if they are arrested for a subsequent offense. Under current law those youth were not allowed to have a judge review their case and had to stay in the adult system. This bill allows a child to request a hearing and have a judge review the case and make a decision on what court should handle the case.

Another win for the books is the passing of SB 718/ HB 589, which requires the Governor’s Office of Crime Control and Prevention to conduct population forecasts on the number of youth charged as adults and held in local correctional facilities, for the next three years. The forecast will include the average daily population along with the average length of stay for youth in local correctional facilities. Our hope is that this data will support our position that this small population of youth tried as adults can be accommodated in the juvenile justice system and will not cause an overpopulation of juvenile detention facilities.

We are thankful to all of our partners who joined us during this legislative session by contacting their legislators, spreading the word, and continuing to show their support for youth justice reform. During the interim, Just Kids Partnership will be out organizing in Maryland to build support for next sessions goals of ending the automatic prosecution of youth as adults and removing youth from adult jails. To learn more about Just Kids work – check out our documentary screening "The Truth About Our Youth,"at the Silver Spring Civic Center on May 6. Reserve your seat HERE.