Class is Back in Session: It's Time To Rethink the Number of School Resource Officers in our Schools

Posted in Across the Country Tuesday, 04 September 2018 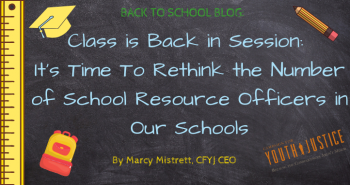 The end of summer has arrived.  Children across the country will officially be back in school this week.  Families have been busy getting ready—new shoes, uniforms, school supplies and bus passes. Children anticipate meeting a new teacher, seeing friends they missed over the summer, and routine schedules.

However, in far too many places, school leaders are struggling with inadequate budgets and public pressure to keep schools safe.  Too often, these responses rely on increasing the presence of law enforcement officers, or in some cases, allowing teachers and administrators to carry weapons in school. Despite there being too many multi-victim school shootings in the U.S., schools remain amongst the safest places for children to be.

(In 1992-93 school deaths by shooting were .55 students per one-million and in 2014-2015 the numbers were .15 students). Yet, the percent of schools across the country who hire school resource officers continued to increase between the first decade of this century (from 54% of districts in 1999 to more than 70% in 2007), and has remained stable since then despite tight funding in school and police districts, and a drastic reduction in funding from the federal COPS program.

Currently, there are 25 states and 560 school districts who have adopted a 4 day academic week to save costs or attend to a teaching shortage. Colorado, Montana, Oklahoma and Oregon have the highest number of school districts running 4-day weeks. On average, school districts save up to 5% of their budgets, though by many accounts, this is the most they save. By looking at these 4 states, we can see other opportunities to save money to invest in children and families, rather than to divest:

• Despite a school funding crisis, Colorado will spend an extra $35m in school resource officers this year.
• Colorado, Montana and Oregon all have a youth incarceration rate that exceeds the national incarceration rate. (National: 152/100k; Colorado: 177/100k; Montana: 170/100k; Oregon: 286/100k). https://www.sentencingproject.org/the-facts/#map?dataset-option=SIR
• All three of these states also send children of color to prison at higher rates than the national average; a practice that is often exacerbated by having police in schools.
• Across the nation, 45,000 youth won’t begin this year in their home district schools due to incarceration; 1:11 of these youth will be housed in adult facilities.
• Oklahoma ranks 48 in per-pupil-spending, yet as the 2nd- lead incarcerator in the nation, spends nearly triple the amount to incarcerate someone.
• Colorado, Montana and Oregon are part of the 18 states who spend more on incarceration than higher education.
• Less than half the states in the country require counsellors for high school students. In Colorado, the hiring of school counselors is not mandated, in Oregon localities much meet or comply with national standards of 1:250 students; Montana requires 1:400 youth; and Oklahoma is 1:450 youth.
• School counselors have been shown to help increase academic achievement, college and career readiness and social emotional learning in students. Furthermore, they have developed culturally-appropriate curricula in many states.

As schools are forced to make tough decisions about how to spend scarce resources, they should consider where their resources have the biggest impacts. Investing in school counselors and positive behavioral interventions, and engaging families in solutions are a great investment in public safety. Police in schools are just more likely to drive up costs in incarceration in the long run.