If Not The Adult System,Then Where? Alternatives to Adult Incarceration For Youth Certified Adults 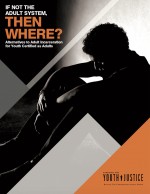 In an effort to identify alternatives to adult incarceration for youth, CFYJ is learning from stakeholders across the country about their efforts to serve youth charged as adults across a continuum of care. In this report, CFYJ shares current and emerging practices for better serving youth charged as adults, insights from practitioners about what makes for successful programming for this population, and specific recommendations for policy and practice change.

Childhood Convicted: The Waiver of Iowa's Youth to the Adult Criminal Justice System 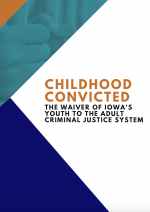 A report released by CFYJ in partnership with the University of Iowa, College of Law Community Empowerment Law Project, if Iowa’s laws do not change, thousands of youth under 18 will continue to receive adult court convictions mostly for simple misdemeanors.

Is it Enough: Implementation of PREA’s Youthful Inmate Standard 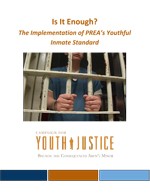 For Youth Justice Action Month CFYJ released its report, “Is it Enough: Implementation of PREA’s Youthful Inmate Standard” in recognition of the 15th Anniversary of the Prison Rape Elimination Act (PREA). PREA is a federal law enacted to address the problem of sexual assault and rape in U.S. detention centers, jails, lock ups, and prisons. Regulations for the law specifically address one of the most vulnerable populations in adult jails and prisons, youth under age 18.

In light of the 15th Anniversary of PREA, CFYJ reviewed over 800 audits of adult correctional facilities, with a focus on the first complete audit cycle, to identify how the facilities are complying with the Youthful Inmate Standard. The key findings are included in this report.

Raising the Bar: State Trends in Keeping Youth Out of Adult Courts, 2015-17 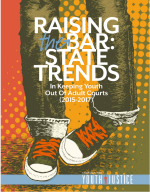 Raising the Bar: State Trends in Keeping Youth Out of Adult Courts (2015-2017) is the fourth edition of our State Trends Report in which we take a look at states that have blocked pathways of children into the adult criminal justice system. 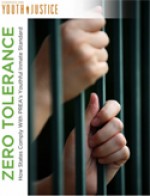 Zero Tolerance: How States Comply with PREA’s Youthful Inmate Standard. This report explores how states house youth under 18 in prisons in the new age of PREA compliance and enforcement. Furthermore, this report highlights national trends in juvenile arrests, crimes, and incarceration of children in the adult system.