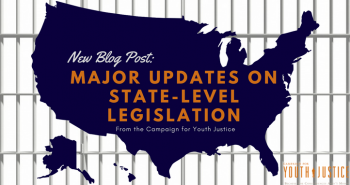 At the start of what promises to be a very political year, and in the midst of difficult debates about budgets and taxes, state legislators are moving forward (or in some cases backward) with legislation affecting youth in contact with the adult criminal justice system. The following is a legislative update of what is happening across the country:

Both Missouri and Michigan are featuring “Raise the Age” legislation this year. Currently in both states all 17-year-olds are automatically charged as adults, no matter how minor the alleged offense. Missouri’s SB 793 has already had a hearing in the Senate Judiciary and Civil and Criminal Jurisprudence Committee, while Michigan legislators and advocates are anxiously awaiting the completion – probably in March – of a study of the potential costs of raising the age in that state.

A more problematically narrow “Raise the Age” bill in Wisconsin – AB 660 – raises the age only for first time non-violent offenders. It has already been heard in the House Committee on Criminal Justice and Public Safety. At the same time, Wisconsin Governor Scott Walker, who is running for re-election this year, has discussed closing the state’s troubled Lincoln Hills juvenile detention facility in favor of five smaller, regional detention facilities.

Texas does not have a legislative session this year, but because of troubles at some remote juvenile detention facilities in that state, the government is considering transfering dozens, perhaps hundreds, of children to an adult prison, an unconscionable act of abandonment that families and advocates are fighting.

There is more unfortunate news, from the state of Maryland, where bills sponsored by the Republican Governor and Democratic House Speaker and Senate President will expand the transfer of children to the adult system if they are involved in “gang” activity. Given ongoing law enforcement scandals in Baltimore, and the direction other states are heading, this anachronistic throw-away-the-key approach seems particularly out of place.

Meanwhile, in Alabama, a governor-sponsored task force has recommended reducing the number of crimes eligible for automatic transfer to the adult system, and SB 148 has been filed to make that happen. And in neighboring Florida, SB 936, a bill to reduce the ability of prosecutors to unilaterally “direct file” children in the adult court has already passed the Senate Judiciary Committee by a 5-1 vote. In Indiana, HB 1389, eliminates the ability of prosecutors to directly file youth into adult court. We are also heartened by strong legislation in Ohio (SB 64 and HB 394) which would eliminate mandatory transfer and in Arizona, HB 2073 would raise the lower age of youth eligible to be direct filed up to age 17.

There will be more legislation – most of it probably good for youth justice, some of it probably not so good. The Campaign for Youth Justice will closely follow these developments throughout the legislative season, and we will keep you updated as major milestones occur.

Despite all the background noise, it does look like, for the most part, youth justice reform in the states will keep heading in the right direction. That, of course, is due to advocates and concerned citizens like you.

Thank you for all you are doing!