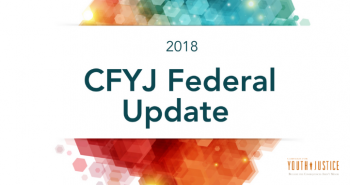 As 2018 comes to a close, the Campaign for Youth Justice has been reflecting on what a great year it’s been for young people across the country. While there have been a lot of victories on the state level, it has been a surprisingly good year for reform at the federal level, despite an otherwise gridlocked government and some rollbacks from the current administration. Below is a short summary of what Congress and the federal government has been up to this past year:

By far the sweetest victory of 2018 came in the last days of the 115th Congress when, 16 years after the Juvenile Justice and Delinquency Prevention Act of 1974 (JJDPA) was last reauthorized, the House and Senate have passed H.R. 6964, the Juvenile Justice Reform Act of 2018, which strengthens and updates the federal law that has been protecting justice-involved youth for nearly 45 years.

The JJDPA was first signed into law by President Gerald Ford on September 7, 1974 and was last reauthorized in 2002. The law remains the only federal statute that sets out national standards for the custody and care of youth in the juvenile justice system and provides direction and support for state juvenile justice system improvements. The final bill passed by Congress strengthens national standards by reducing the placement of youth in adult jails pre-trial and providing more structure to the law’s requirement to decrease racial and ethnic disparities, a critical provision ensuring that children, regardless of their race or ethnicity will be treated fairly and equitably by our legal system. The bill also promotes the use of alternatives to incarceration; supports the implementation of trauma-informed, evidence-based practices; calls for the elimination of dangerous practices in confinement, including eliminating the use of restraints on pregnant girls; improves conditions and educational services for incarcerated youth; focuses on the particular needs of special youth populations, such as trafficked youth and Tribal youth; increases local control in delinquency prevention programming; and increases accountability. The legislation also includes a two-year reauthorization of the Runaway and Homeless Youth Act (RHYA).

The JJDPA has played a critical role in reducing youth incarceration, which is at its lowest rate in four decades. With the improvements made by the legislation, states can continue to invest in strategies that support children in their homes and communities. We are so grateful to the bill’s main cosponsors, Senator Chuck Grassley (R-IA), Senator Sheldon Whitehouse (D-RI), Congressman Jason Lewis (R-MN), and Congressman Bobby Scott (D-VA), for the persistence in getting this bill across the finish line. We are also grateful to each one of you –your calls, tweets, and success stories helped hold federal legislators’ feet to the fire.

Since the JJDPA was last reauthorized, federal funding has steadily decreased. As part of our advocacy with the Act 4 JJ Coalition, a broad network of more than 150 organizations representing nearly all the states and the District of Columbia, we have urged Congress to restore this critical funding. Our efforts finally paid off with the Fiscal Year 2018 omnibus appropriations bill (H.R. 1625) where we saw a slight increase in funding for juvenile justice funding. The omnibus provided $60 million for Title II of the Act, up from $55 million in FY 2017 and $27.5 million for Title V of the Act, up from $17.5 million the previous year.

As of this writing, funding for juvenile justice programs remains unclear. The Senate’s Commerce, Justice, and Science Appropriations bill (S. 3072) provides an increase in funding for juvenile justice funding, from $282.5 million in Fiscal Year 2018 to $297 million in Fiscal Year 2019, whereas the House bill (H.R. 5952) zeroes out funding. However, now that the bill has been reauthorized, Congress now has a mandate to fund these critical programs at levels that will make a real difference in young people across the country. We’ll be sure to keep you posted as news develops.

While the JJDPA reauthorization was the biggest victory of the year, there were several other pieces of legislation that made progress in 2018. The Youth Medicaid Protection Act was included in H.R. 6, the “SUPPORT for Patients and Communities Act,” which was signed into law on October 24, 2018. It requires states to suspend, but not terminate Medicaid for youth (up to 21) who are incarcerated and ensures they will have access to Medicaid upon release if they are still eligible. This is critical for making sure youth have access to the health and mental health services they need without disruption when transitioning from secure detention back to community.

The House also passed H.R. 68, Tiffany Joslyn Juvenile Accountability Block Grant Program Reauthorization Act of 2017. This bill, whose last authorization lapsed in 2009, updates the Juvenile Accountability Block Grant (JABG) to reflect current research and practice. Key provisions in the bill include incentives for states to use graduated sanctions and incentives grounded in positive youth development, providing enhanced anti-bullying measures, and youth violence prevention and intervention services. It also updates the JABG to include evidence-based practices such as trauma informed practices and mental health care. H.R. 68 allocated $25 million per year for five years to JABG, which has been zeroed out since fiscal year 2014.

Congress also passed the Project Safe Neighborhoods Grant Program Authorization Act of 2018 (H.R. 3249). While not perfect, the bill provides grants to localities to develop “evidence-based and data-driven intervention and prevention initiatives…which may include street-level outreach, conflict mediation, provision of treatment and social services, and the changing of community norms.” These types of solutions will hopefully lead to stronger, safer communities and protect our most vulnerable youth.

Many other laws were introduced this year that, unfortunately, did not move in either chamber, but do provide good markers as we embark upon a new Congress in 2019. Bills include the Prohibiting Detention of  Youth Status Offenders Act (S. 866/H.R. 1885), which would phase out the use of the valid court order exception, which allows for the secure detention of youth with non-criminal offenses for a violation of a valid court order; the Fair Chance for Youth Act of 2017 (H.R. 61), which amends the federal code to establish a process to expunge and seal certain youth criminal records; and H.R. 6011, which would end life-without-parole and de facto life sentences for youth in the federal criminal justice system.

While there has been a lot of good legislation in the 115th Congress, we also saw movement on some negative legislation as well. The Criminal Alien Gang Removal Act (S. 2380/H.R. 3697), which passed in the House, but failed to move forward in the Senate, would have created a new sweeping definition of “criminal gang,” and targets those who never committed a single criminal act for deportation, among other harmful provisions.

The Students, Teachers, and Officers Preventing (STOP) School Violence Act of 2018 was also included as part of the Fiscal Year 2018 omnibus spending bill. It authorizes $75 million annually for state and local schools to fund training to prevent student violence; to develop and operate an anonymous reporting system for threats of school violence; to develop and operate school threat assessment and intervention teams; to coordinate with local law enforcement; and to invest in any additional measures to improve school security. While the legislation sounds good on its face, there are several areas that give us concern, which you can read about here.

Attacks from the Administration

Unfortunately, for as much progress as we made this year, we have also been on the defense against actions of the Department of Justice (DOJ) and the Office of Juvenile Justice and Delinquency Prevention (OJJDP). From changes in the compliance requirements with the Disproportionate Minority Contact requirement to the rescinding of key guidance, and a reemergence on the idea of unaccompanied minors as violent-gang members, DOJ and OJJDP have taken actions that will hurt children of color who are disproportionately exposed to and harmed by the justice system.

We have worked hard to fight back against this emerging narrative and to make sure legislators are informed of these actions. Luckily, the reauthorization of the JJDPA should help protect youth from these setbacks, but we will have to continue to be vigilant as implementation of the new law begins.

With so many new incoming members to the 116th Congress, we plan to spend January educating members and their staff on the progress we have made in 2018 and brainstorming how we can build on those victories in 2019. This includes issuing our new recommendations for the 116th Congress.

Implementing the updates to the JJDPA will also be important in 2019. Be on the lookout for resources from CFYJ and the Act 4 JJ Coalition on what these changes mean for states. As mentioned above, we will also be keeping a close eye on DOJ and OJJDP to ensure proper and full implementation of the Act. We will also be urging Congress to exercise its oversight authority to ensure OJJDP is being held accountable and doing its job as mandated by the JJDPA.

Our goal in 2019 is to provide more consistent updates on our Federal work so you can stay updated and learn how to get involved. We look forward to what’s ahead in the New Year!