What A Week for Youth Justice: Help Us Thank Our Advocates and Families 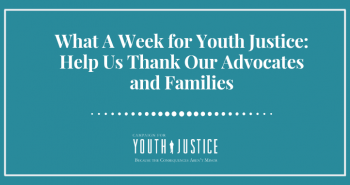 As state legislative sessions are starting to come to a close, we are seeing some excellent progress in our state campaigns and with some of our other state partners.  If you need a little joy this week, please feel free to send inspirational tweets to the advocates and families leading these initiatives in the states: