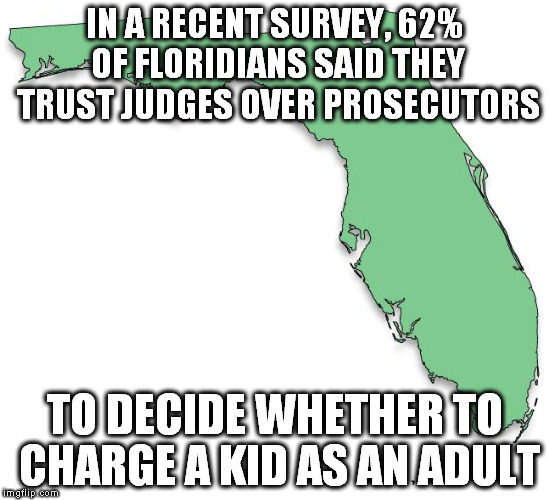 A recent survey conducted by the James Madison Institute and the Charles Koch Institute gives deep insight of Floridians’ thoughts on criminal justice reform in their state. The survey results couldn’t have come at a more perfect time. Recently, Florida prosecutor, Angela Corey, lost her chance at reelection in the primary. Corey was notorious for pursuing harsh sentences. She is notorious for failing to get a conviction on George Zimmerman, the man who killed Trayvon Martin. She did a number of other injustices during her eight years in office.  Corey charged a 12 year old boy named Cristian Fernandez with first degree murder of his 2 year old brother, David. Cristian, David, and their other brother and sister had been left at home, without supervision, while his mother was at work. That’s when David received a serious head injury and died. Cristian’s mother came home and took Cristian to school. She would wait eight more hours before taking David to the hospital. While the details around how David was injured are still foggy, Corey immediately deemed Cristian the perpetrator. Cristian was held in an adult jail until his conviction where he sentenced to life without parole. Corey would later fight Cristian’s transfer to a juvenile facility. Corey doubled the number of felony cases in Florida where minors were charged as adults. It would be one of Cristian’s lawyers who challenged and defeated Corey.

So what does her losing the election have to do with this survey?

For one, they show a drastic change in attitude with the Florida population. 72% of Floridians believe that it is time to reform the criminal system in Florida and 64% believe that there are too many nonviolent offenders serving time. The opinions show the possibility that kicking out hard prosecutors means that Floridians want different sentencing practices.  62% of Floridians also said they trust judges over prosecutors to decide if a minor should be charged as an adult. That contradicts Angela Corey’s efforts to increase the number of felony cases for minors charged as adults.

The survey is on par with changing laws in Florida. Recently, the state legislature repealed the “10-20 Life” law that required judges to give mandatory sentences to gun involved offenses. Unfortunately, this repeal will not apply to offenders currently incarcerated, even though 63% of Floridians agreed that it should apply to those already in jail. However, this is still a major step for Florida’s criminal justice reform. Another more preventive law Florida has passed a law regarding mental health and Medicare. This plan requires Medicare to offer comprehensive treatment plans for patients diagnosed with a mental illness. Because people with mental illnesses will have better access to treatment, in the long run, the number of mentally ill people with a criminal record will decrease. Still in discussion in the Florida state legislature is the Direct File bill. This bill would limit the power prosecutors have when deciding to charge a juvenile as an adult. Currently, the law states that if a juvenile, no matter the age, commits a certain offense, such as murder or sexual battery, the prosecutor can send them straight to adult court. Under the new bill, state attorneys can only use direct file for juveniles between the ages of 16 and 18. And the prosecutor can only direct file if it involves the 21 offenses listed in the bill. While the first goal of the bill was to make transfers only to be decided by a judge, supporters of the bill had to compromise in order to move it along. The Human Rights Watch found that Florida has more juveniles transferred into the adult court than any other state. The Florida government has been slow to keep up with public opinion. With new legislation being introduced and passed, hopefully criminal justice reform will begin to take effect.