No Excuses: It's Time To Implement the Prison Rape Elimination Act 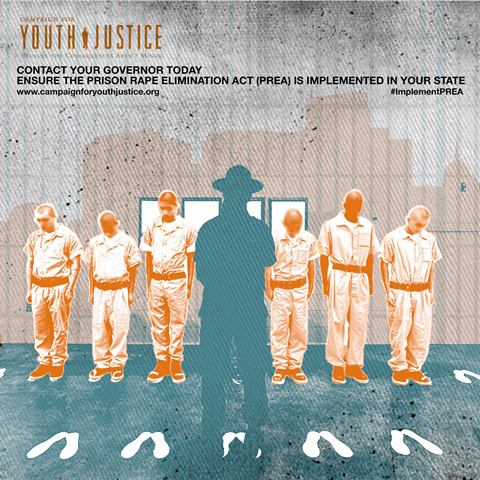 The Prison Rape Elimination Act (PREA) is a federal statute focused on sexual assault and victimization in juvenile facilities, prisons, jail, lockups, and other detention facilities.  The goal of PREA is to prevent, detect, and respond to sexual abuse in detention and correctional facilities.

Who is affected and why is this important?

An estimated 4.4% of prison inmates and 3.1% of jail inmates reported experiencing one or more incidents of sexual victimization by another inmate or facility staff in a 12 month period. Nationwide, these percentages suggest that approximately 88,500 adults held in prisons and jails had been sexually victimized in a one year time period.[i]

Even though only 1%[ii] of all jail inmates were youth under 18 in 2005 and 2006, they accounted for 21% and 13% of the victims of inmate-on-inmate sexual violence in jails respectively.[iii]

To “protect” the youth in adult facilities, some jails and prisons keep youth in solitary isolation for upwards of 23 hours a day.
Due to the extreme conditions of confinement and exposure to adult jails and prisons, youth have the highest suicide rates of all inmates in jails

In a recent BJS study, two-thirds of youth ages 16 and 17 in adult jails and prisons who had been victimized reported being victimized more than once by other inmatesand three-quarters were victimized by staff more than once.

Jails and prisons are simply not equipped to protect youth from the dangers of adult jails and prisons. PREA recognizes the inherent dangers of placing youth in adult facilities therefore the PREA Youth Inmate Standard (§115.14) requires that:

The youthful inmate standard requires agencies must do their best in order to avoid placing youth in isolation to comply with this provision and must give youth daily large-muscle exercise and any legally required special education services, and must provide them access to other programs and work opportunities to the extent possible.

No youth under 18 can be placed in a housing unit where contact will occur with adult inmates in a common space, shower area, or sleeping quarters.

Outside of housing units, agencies must either maintain ‘‘sight and sound separation’’—i.e., preventing adult inmates from seeing or communicating with youth—or provide direct staff supervision when the two are together.

The PREA Resource Center Recommends that:

States change the policies or laws in order to reduce the number of youthful offenders housed in adult facilities.[v]

On September 24, 2013, CFYJ along with the American Bar Association hosted a panel to commemorate the 10th anniversary of PREA becoming law, "Protecting the Incarcerated Client from Sexual Violence under the Prison Rape Elimination Act".

Video highlights of the panel can be found here.

National Sign on Letters in Support of the Implementation of PREA