A Closer Look at Prison-Based Education 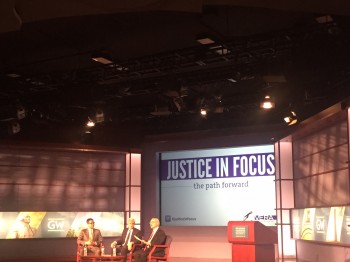 Last Tuesday, I attended Justice in Focus: the Path Forward – a talk hosted by the Vera Institute at George Washington University School of Media and Public Affairs. At the event, a series of speakers with diverse experiences and perspectives on the criminal justice system covered a comprehensive range of issues including the economic and social benefits of reducing harsh punishments, the need for positive relationships between law enforcement and the community, and the overall status quo of the criminal justice system in the United States today.

I was particularly enlightened by the segment on firsthand experiences where Craig DeRoche, President of the Justice Fellowship, and Stanley Richards, Senior Vice President of the Fortune Society, shared insights based on their own personal experiences within the criminal justice system. Richards brought forth an issue that is often overlooked in the discourse on criminal justice reform – education. A formerly incarcerated beneficiary of prison-based education, Richard’s experience reflects the significance and efficacy of providing opportunities for former inmates to reintegrate into society.

Research demonstrates that prison-based education helps shape the social and economic outcomes of former inmates. Participants have a 43 percent lower chance of returning to prison in comparison to non-participants. Additionally, prisoners who participated in academic or vocational education programs have been shown to have better employment outcomes post-release.

Moreover, prison-based education is cost effective by virtue of its effect on recidivism reduction. According to a meta-analysis conducted by the RAND Corporation, reincarceration costs are $0.87 million to $0.97 million less for those who receive correctional education, which outweigh the costs of prison-based education.

As the research suggests, the logic is simple. Give people the skills to be productive members of society and the positive effects will transcend the individual to the community.