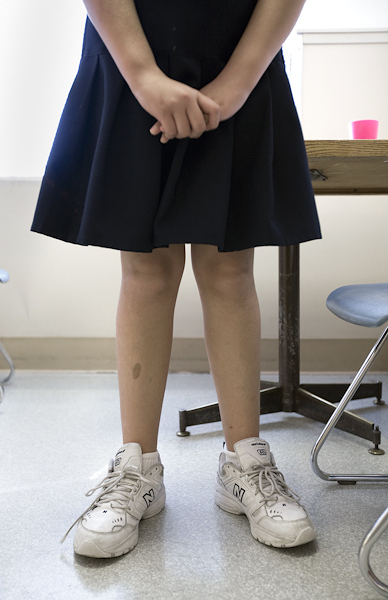 A young girl at Maryvale, an all-girls level-12 institution in Rosemead, California. Photo by Richard Ross.

The National Crittenton Foundation, in partnership with the National Women’s Law Center, just released a report entitled “Gender Injustice: System-Level Juvenile Justice Reforms for Girls”, which reveals how and why the girls’ experience of the American juvenile justice system is very different from the boys’. The issue has come under the spotlight as girls are increasingly entering this system but continue to lack appropriate care and support. Indeed, despite an overall decline in the arrests of youth, girls’ share of arrests has increased by 45% over the last two decades. Meanwhile, girls’ share of detentions increased by 40%. These alarming numbers are products of the incomprehensive and inadequate policies girls who get pulled into the juvenile justice system have been subjected to. Indeed, a large majority of these kids have a background of deprivation, abuse and violence, traumatic experiences that are directly related to their behaviors, which in most cases don’t pose any threat to public safety. Thus, among the girls arrested nationwide, there is a disproportionate number of them whose offenses are connected to poverty, abusive homes or poor relationships, such as “prostitution” (which is increasingly recognized as being sexual exploitation of minors), liquor law violation or curfew violation. Furthermore, the report highlights that these very young women are still consistently sent behind bars for status offenses, misdemeanors or other minor offenses that don’t represent any danger for the public.

Among these vulnerable girls, some groups are even more exposed. Young ladies of color and girls from the LBQ/GNCT (Lesbian, Bisexual, Questioning/Gender Non-Conforming or Transgender) community are indeed at a greater risk than their white/straight or gender-conforming peers to enter the juvenile justice system and to be discriminated against throughout the whole judicial process.

The report reminds us of “Jane Doe”’s case, an “example of the way juvenile justice systems too often prioritizes control over treatment, disregarding the clear need for a developmental approach.” In 2014, a 16 year-old transgender girl of color who had been sexually abused/trafficked her whole life was sent to an adult women prison at the request of the Connecticut’s Department of Children and Families, before eventually ending up in isolation in a secure facility for boys. This story illustrates the way the needs of youth, especially of girls, are too often ignored by the juvenile justice system, from the police to the facilities’ staff. Yet, the report underlines the benefits a more comprehensive, developmental approach would have, and gives the 9 following recommendations for a reform of the system:

-         - Attorneys, judges and probation officers should use trauma-informed approaches to improve court culture for girls

-         - Use health dollars to fund evidence-based practices and programs for girls, and address health needs related to their trauma

-         - Limit secure confinement of girls, which is costly, leads to poor outcomes, and re-traumatizes vulnerable girls