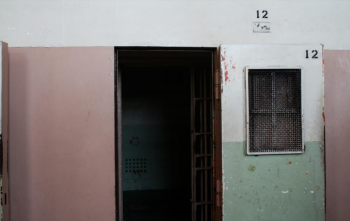 No evidence exists to support the use of solitary confinement on youth, according to Jenny Lutz of the Stop Solitary for Kids campaign, and better alternatives would adapt to what evidence finds effective in correcting young people’s behavior. This realization, Lutz said, has offered a powerful rallying point for practitioners, advocates, and academics alike.

Lutz, a staff attorney at the Center for Children’s Law and Policy (CCLP), spoke to interns and fellows working with juvenile justice–related organizations at CFYJ’s offices Tuesday.

The lunch-hour discussion detailed the effects of solitary confinement on youth health, as well as the promising solutions proposed to address the widespread problem of isolating youth. These solutions most obviously hold promise because of the sound psychological and social-science research backing up alternative tools for behavior corrections.

But also, in an environment of gridlock and partisanship, Stop Solitary for Kids’ solutions inspire hopefulness because we can expect to see the solutions implemented relative swiftly, having found support from associations of probation officers and corrections leaders. This is no easy accomplishment.

Reflecting so many other successful areas of criminal justice reform in the past year, Stop Solitary for Kids is a coalition of strange bedfellows pushing for the same goals. This coalition – the CCLP, Georgetown University’s Center for Juvenile Justice Reform, the Justice Policy Institute, and the Council of Juvenile Correctional Administrators – respectfully works together to find wise solutions.

Switching to safer and demonstrably effective practices to correct the behavior of inmates, after all, improves safety in the correctional facility and would reduce challenges faced by correctional officers and other staff. The successes of states that reduced the general use of solitary confinement support this finding as well.

With these mutual interests, and with reform advocates acknowledging the struggles faced by on-the-ground staff who have spent their careers serving youthful detainees, the groups came together to build smarter policy and offer help to juvenile corrections leaders.

Of course, changing the behavior and tools of corrections staff requires a change of mindset among the staff – something no legislation could accomplish. So, without that respect and teamwork, policy change would not only be more difficult, according to Lutz: without working with practitioners, any policy change enacted would fail expectations.

But, in the meantime, the campaign has built a sturdy foundation of legislative goals and of credible publications rooted in sound technical advice and research since launching in April, winning experts’ support at a federal and state level through an inclusive and evidence-based approach.