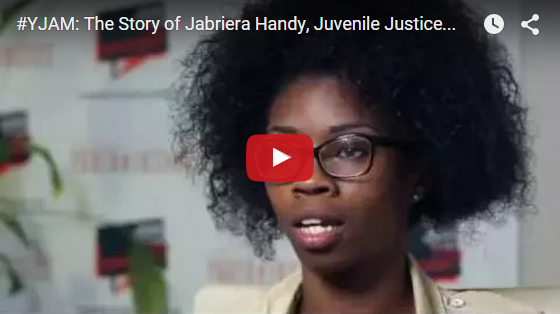 This theme for this year's Youth Justice Awareness Month is, "The Power of Sharing Stories". All month long CFYJ will share stories of youth and family members that have been impacted by the adult criminal justice system. This week we share the story of juvenile justice advocate, Jabriera Handy

Jabriera grew up in Baltimore, Maryland. When she was 16, she got into an argument with her grandmother. As Jabriera’s grandmother was disciplining her, Jabriera tried to get her off her. Jabriera left the house, and later that day her grandmother died of a heart attack because of the argument. She was tried as an adult for second degree murder, second degree assault and first degree assault. When she went to court for a hearing, she was two days away from turning 18, so she plead guilty to the charges for fear of the trial dragging out longer and her punishment being worse. She was taken to a juvenile facility initially where she received resources such as education, group time, and mental health help. This was short lived however. She later was taken to an adult facility where she had to shower with women twice her age and was shamelessly exposed to a squat and cough in front of everyone while menstruating. She was placed on lockdown three times, once for misconduct, once with no reason, and the last time was because of a fight. The last lockdown was supposed to last two weeks but ended up being 36 days. When in lockdown, there was no contact with prison staff, only being housed in the same area as other inmates.
When she was released she was denied many opportunities. She asked for vouchers for food and services that other inmates receive upon release, but she was denied those too because felons don’t receive them. She wanted to attend University of Baltimore College, but was automatically rejected due to her felony charges. She had no place to stay. Then she met the Just Kids Maryland Campaign who assisted her and worked to get her record expunged. Now she works with Just Kids as an Assistant Youth Organizer where she has been working for four years. Now she works to share the stories of other youth such as herself because she knows too well that the issue of youth incarcerated as adults needs to be addressed. While also being a single mother of a 2-year old, she has been a mentor to youth and has been an advocate and a catalyst for change.