Actions Matter: How We Can Show our Girls We Care

I met Lee-Lee six years ago, while she was in juvenile hall. She was 14. Her first child was six months old. Her charge? Prostitution. Two days before Lee-Lee’sarrest, she was sexually assaulted by the man who bought her from her pimp. The next night, she was back on the streets. When I asked her if she reported her sexual assault to the police, she said, “of course not—they were arresting me.”

Federal law defines any commercial sex act involving someone under the age of 18 as a “severe form of trafficking.” And yet every year in the United States, hundreds of girls and gender-nonconforming children are arrested for prostitution, solicitation, and other-related crimes.

The JJDPA has not been reauthorized since 2002. When the JJDPA was first introduced, there was no specific mention of gender-bias in the juvenile justice system—it was through the reauthorizations in 1992 and 2002 that increased attention and support was given to programs focused specifically on girls and gender-nonconforming youth. Over the last decade, funding for the JJDPA has drastically dwindled, although more recently Congress has appropriated some additional resources for system-involved girls, which is a step in the right direction.

The JJDPA is imperative because it:

Through reauthorization, the JJDPA can be strengthened to better serve girls and gender-nonconforming youth by:

Reauthorizing and strengthening the JJDPA is necessary because more and more girls and gender-nonconforming youth are entering the system. Many of these children are victims of abuse, are involved in the foster care system, and are victims of child sex trafficking. Many of these girls are mothers themselves. Young mothers like Lee-Leeneed therapeutic support so that they can heal themselves, and prevent their children from becoming trapped in the same cycles of poverty and abuse. 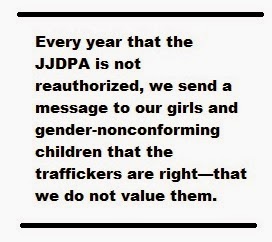 Like many victims of trafficking who are arrested, Lee-Lee’s poem tells us how worthless, misunderstood and cast away she feels. Traffickers capitalize on these feelings of worthlessness by convincing children that no one cares for them, and that they should put all of their trust into the trafficker.

If JJDPA is reauthorized and strengthened, Lee-Lee’s probation officer will be someone who understands the unique struggles that young girls face. Her treatment and supervision plan will include therapy, parenting classes, mentoring, and support from probation officers and professionals who see her as a child and a victim of abuse, rather than a criminal.

Every year that the JJDPA is not reauthorized, we send a message to our girls and gender-nonconforming children that the traffickers are right—that we do not value them, we do not care about their histories of abuse and trauma, and that instead of receiving support, they will be punished and judged.

Maheen Kaleem is the Equal Justice Works Fellow at Human Rights Project for Girls, sponsored by Toyota Motor Corporation and Gibson, Dunn & Crutcher LLP. She has been working with system-involved youth for over ten years. 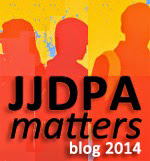 This post is part of the JJDPA Matters blog, a project of the Act4JJ Campaign with help from SparkAction.

The JJDPA, the nation's landmark juvenile justice law, turned 40 in September 2014. To mark this anniversary, Act4JJ member organizations and allies will post blogs on issues related to the JJDPA throughout the fall and winter. To learn more and take action in support of JJDPA, visit the Act4JJ JJDPA Matters Action Center, powered by SparkAction.