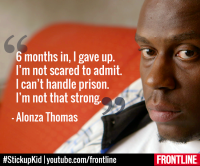 Today Juvenile justice advocates across the country applaud Sen. Sheldon Whitehouse (D-RI) and Sen. Charles Grassley (R-IA) for the introduction of the Juvenile Justice and Delinquency Prevention Reauthorization Act of 2014, to reauthorize and strengthen the Juvenile Justice Delinquency and Prevention Act of 1974 (JJDPA).
Signed into law by President Gerald Ford on September 7, 1974, and most recently reauthorized in 2002, the JJDPA embodies a partnership between the federal government and the U.S. states, territories and the District of Columbia to protect children and youth in the juvenile and criminal justice system, to effectively address high-risk and delinquent behavior and to improve community safety.
More than seven years overdue for reauthorization, the JJDPA is the only federal statute that sets out national standards for the custody and care of youth in the juvenile justice system and provides direction and support for state juvenile justice system improvements. The JJDPA also supports programs and practices that have significantly contributed to the reduction of delinquency.
Despite a continuing decline in youth delinquency, more than 60,000 young people are held in detention centers awaiting trial or confined by the courts in juvenile facilities in the U.S.  For these confined youth, and the many more kids at-risk of involvement in the justice system, the JJDPA and programs it supports are critical. Youth who are locked up are separated from their families, and many witness violence. These youth struggle when they get out, trying to complete high school, get jobs, housing, or go to college. Aside from the human toll, the financial costs of maintaining large secure facilities have also made it vital to rethink juvenile justice in every community.
Key provisions in include:
For more information go to www.ACT4JJ.org. 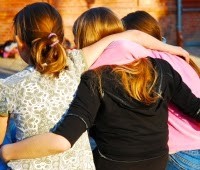 Imagine being a child abused or neglected by someone you know, feeling unsafe in your own home, being betrayed by people who you should be able to trust. Where would you go? How would you cope with such traumatic experiences? For girls involved in the juvenile justice system, their options are very limited, and none of them would be seen as good choices from a middle class perspective. Girls typically turn their rage inward — they run away from home, are truant from schools, become defiant, or engage in self-harming behaviors. As a result, girls disproportionately end up in the juvenile justice system for status offenses—actions that would not be considered criminal if committed by adults—rather than for violent or person-to-person crimes.

Prisoner’s Legal Services of New York (PLS) reached a landmark settlement with the New York State Department of Corrections and Community Supervision (DOCCS) in the case of Cookhorne v. Fischer which will result in significant and positive changes regarding the use of solitary confinement as a disciplinary sanction for 16 and 17 year old inmates in DOCCS custody.

The settlement agreement contains several amendments to DOCCS policies and prohibits solitary confinement of youth for disciplinary purposes by limiting the maximum hours of confinement per day. The agreement mandates that a youth may be confined for no more than 18 hours a day, five days per week, and no more than 22 hours the other two days of the week. It further establishes a minimum number of hours for programming and recreation during this out-of-cell time. The settlement agreement also requires that regulations be amended to state that age is a mitigating factor in disciplinary proceedings where a youth has been accused of misconduct and requires a written statement of how the age affected the disposition.

Advocates are a Powerful Voice at DC Council Hearing 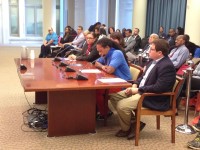 On Wednesday, October 22nd, the DC Council Committee on the Judiciary and Public Safety held a public hearing on Bill B20-825, the Youth Offender Accountability and Rehabilitation Act of 2014 (YOARA). The hearing was chaired by Councilmember Tommy Wells, Chairperson of the Committee. Wells began the hearing by highlighting the main provisions of the bill and the positive changes this would have for youth charged as adults in the District of Columbia. DC supporters of the bill made sure to have a strong presence, and with the leadership of the JOY Campaign team, over 100 people attended the hearing.

What the YOARA bill does:
1) Prevents most youth from being held in adult jail while they are awaiting trial.
2) Allows youth who have been charged as adults to have the adult court judge review all the available facts to determine if adult prosecution serves the public interest. If not, the judge can transfer the case down to juvenile court.
3) Ends the practice of automatically charging all youth with a prior conviction in adult court, even for minor offenses and if local prosecutors think the case would be more appropriately handled in juvenile court.

YJAM 2014: No One Should Have to Suffer a Lifetime Because of a Childhood Mistake 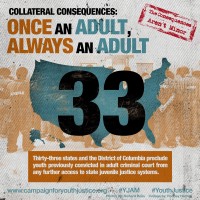 At a recent event, someone commented to me that youth who are tried in adult criminal courts have to contend with a “life sentence” of consequences that result from a conviction and completely negates the prospect of positive change for most youth.

As a youth justice advocate for the Campaign for the Fair Sentencing of Youth I often speak out against the practice of sentencing children to life without the possibility of parole, but this was the first time I had ever heard the term “life sentence” used in reference to the lifelong consequences that children face when they receive an adult criminal conviction. Such a conviction can limit access to financial aid for school, housing in many rental units, employment, voting and in myriad other ways. In that moment of clarity, I felt a sudden rush of energy and knew that what he just stated was absolutely true and unfair.

Actions Matter: How We Can Show our Girls We Care

I met Lee-Lee six years ago, while she was in juvenile hall. She was 14. Her first child was six months old. Her charge? Prostitution. Two days before Lee-Lee’sarrest, she was sexually assaulted by the man who bought her from her pimp. The next night, she was back on the streets. When I asked her if she reported her sexual assault to the police, she said, “of course not—they were arresting me.”

Federal law defines any commercial sex act involving someone under the age of 18 as a “severe form of trafficking.” And yet every year in the United States, hundreds of girls and gender-nonconforming children are arrested for prostitution, solicitation, and other-related crimes. 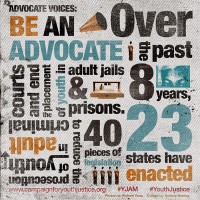 As we reflect on this year and in commemoration of Youth Justice Awareness Month (YJAM), we have seen the pursuit of many youth justice reforms across the country. Efforts to improve the lives of our youth come in many forms - whether it's pursuits to improve laws, efforts to change the hearts and minds of the public, or working to empower youth and their families - the Campaign for Youth Justice applauds the daily efforts of advocates who take a stand for youth. Today, we highlight what many say can't be done: change for the better. Our youth, our communities, and our nation have all felt the positive impact of your efforts. Thank you for all that you do.