The Importance of Protecting LGBTQ Youth in the Juvenile Justice System

On May 25, 2017, the Ohio Supreme Court reversed its landmark decision in State v. Aalim, which held that Ohio’s mandatory transfer statute, which required the transfer of 16 and 17-year olds to adult court for certain offenses after a finding of probable cause, was unconstitutional.

Spotlight: 6% of the Population, but 40% of the Transfers to Adult Court: The Reality for Black Girls in Iowa’s Juvenile and Adult Justice Systems

In 2014, Black girls made up approximately 6% of the female youth in Iowa ages 10 to 17; however, they made up 27% of the female juvenile complaints, 41% of the petitions filed on girls in juvenile court, and about 40% of the girls waived to adult court.   This data is given greater context in the Iowa Girls Justice Initiative  final report which builds on a 2016 data report.  Here are just a few of the difficult statistics that highlight the racially disparate and disproportionate reality for Black girls in Iowa’s juvenile and adult justice systems.

By Jeree Thomas, Policy DirectorThis month, the Journal of Youth Violence and Juvenile Justice featured a new paper by Peter Lehmann, Ted Chiricos, and William Bales called, Sentencing Transferred Juveniles in the Adult Criminal Court: The Direct and Interactive Effects of Race and Ethnicity.   The research analyzes data from over 30,000 youth defendants tried as adults in Florida for felony offenses from 1995 to 2006.  There are three guiding questions of the research.  First, is there a statistically significant difference between the likelihood of a Black or Hispanic youth receiving a jail or prison sentence instead of community supervision than that of their White peers?  Second, do Black and Hispanic youth receive lengthier prison and jail sentences than their White peers?  Finally, what impact does age and sex in addition to race have on the likelihood of receiving a prison sentence, and on the length of that sentence?

Raising the Age: A policy to cut costs and crime while keeping youth and communities safe 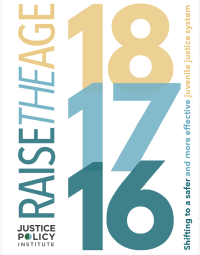 By Arthur Rizer and Marc Schindler

A new report shows that over the past decade, half of the states that had previously excluded all 16- and/or 17-year-olds from juvenile court based solely on their age absorbed these young people into the youth justice system without significantly increasing taxpayer costs, and the number of youth in the adult system nationwide was nearly cut in half.

Wednesday, September 21, 2016, the New York Civil Liberties Union (NYCLU) and Legal Services of Central New York (LSNY) filed a class action lawsuit against the Onondaga County Sheriff’s Office and Syracuse City School District on behalf of six named plaintiffs—Black and Latino youth ages 16 and 17 jailed at the Justice Center—and a class of similarly situated youth.The suit’s charges are over the use of solitary confinement for youth in the adult jail citing, “the use of solitary confinement violates the children’s rights and that the sheriff and school district are denying them an appropriate education in violation of the Fourteenth Amendment, the Eighth Amendment, and the Individuals with Disabilities Education Act.”

The U.S. Bureau of Indian Affairs (BIA) expressly denounces the trial of youth under age 18 as adults in a draft model juvenile justice code published earlier this year as a template for tribal law. Tribal governments face unique challenges in juvenile justice, with systems of overlapping jurisdictions spurning confusion and threatening tribal rights as well as children’s rights. The juvenile code helps American Indian and Alaskan Native tribes develop codes of their own for operating tribal judicial systems.

The BIA’s draft of the Model Indian Juvenile Code does not provide for an adult-system transfer under any circumstances. A sidebar explaining the decision succinctly explains:“Trying children as adults has not been shown to reduce crime, facilitate rehabilitation, or make communities safer.”Citing research compiled by the Department of Justice (as well as by the Centers for Disease Control), the explanation details how transfer has “little deterrent effect on would-be juvenile offenders” while in fact having “the unintended consequence of increasing recidivism … and thereby promoting life-course criminality.”BIA’s statements to that effect are noncontroversial in the criminological community, but rarely does an authority – a state legislature, for instance – have an opportunity to rewrite the juvenile code from top to toe to reflect evidence-based practices. This model code presents just such an opportunity for BIA.Congress mandated the code with legislation in 1986, and the first version published in 1988; however, BIA has not issued an update since. The update, co-developed with American Indian groups and tribal law scholars, brings together evidence-based and developmentally appropriate practices, approaching juvenile delinquency from more of a public health perspective. BIA oversees U.S.-tribal relations with more than 500 federally recognized American Indian tribes.The update to the 1988 model code assists “federally recognized tribes in creating individual codes focused on juvenile matters,” according to a BIA press release. The code, along with other advancements from the BIA and Department of the Interior (which oversees BIA), represents bolstered support for tribal sovereignty through the oft-criticized Bureaus of Indian Affairs and Indian Education.Administrators from the Department of Justice and Department of the Interior as well as advocates in tribal sovereignty and juvenile justice herald the new code. DOJ Office of Juvenile Justice and Delinquency Prevention (OJJDP) Administrator Robert Listenbee called the update “an important step forward in ensuring tribal courts have the resources they need to respond effectively to at-risk and delinquent youth in Indian Country,” noting that the revision attends to the OJJDP mission of “safeguarding the fair and equitable treatment of all youth in the juvenile justice system.”The head of BIA, Lawrence Roberts, says the 2016 model code “improves decades-old guidance to aid tribes in developing their own codes that will serve and protect” justice-involved youth. The National Council of American Indians and the Center of Indigenous Research and Justice both provided technical and community input to support the drafting of the code.

Raising the age of criminal jurisdiction beyond 18

By Anne-Lise Vray & Jessica SandovalOver the past few years, voices asking to raise the age of criminal responsibility beyond age 18 have emerged. As a leader in the youth justice field, the Campaign for Youth Justice plays an important role in ending the prosecution, sentencing, and incarceration of youth in the adult criminal justice system. CFYJ accomplishes this in three ways, through (1) state and federal advocacy, by providing technical assistance and training support, (2) strategic communications, by lifting the voices of those most impacted, and (3) research, by serving as a clearinghouse of information and effective alternatives. As the only national organization dedicated to this issue, we were interested in finding out what raising the age to 21 practically and logistically imply, especially in order to address the concerns of many stakeholders in the field – particularly those who fear that it is dangerous to house youth over 18 with younger children.To determine current practice on the ways states with extended juvenile court jurisdiction beyond age 18, we interviewed juvenile justice department administrators in the states who have extended age of juvenile court jurisdiction 21 and up to 25.  From these interviews, the following themes emerged:

Overall, our interviewees agreed upon the fact that these older youth were better served in the juvenile justice system, where they can – unlike in the adult system - receive educational programs, appropriate treatments, and actually be rehabilitated. They also addressed the concerns about these young adults having a bad influence on younger children, and asserted that putting them together could actually have a positive effect, while no particular additional behavioral challenges could be observed. “There are 15 year olds housed with 24 year olds. The kids go where their needs are best met, regardless of their age. Instances of victimization are very rare because of the big brother mentality that develops between older youth and younger kids,” one of the interviewees told CFYJ.According to adolescent brain science, a young person’s brain is not fully developed until they reached their mid-20s. The interviewees were aware of the research, and many of them used it as a base to defend the system in place in their state. “Brain development science shows that the juvenile justice system is still the appropriate setting for this older population, regardless of crime, based on culpability, etc…,” a juvenile justice department leader told us. The evidence presented by brain development science is indeed what one the main reasons to raise the question of extending juvenile jurisdiction to this older population in the first place.This piece of research conducted by CFYJ modestly contributes to informing the field about the pros and cons of raising the age of juvenile jurisdiction beyond 18, what factors may be present, and if it’s the appropriate time to consider this option.