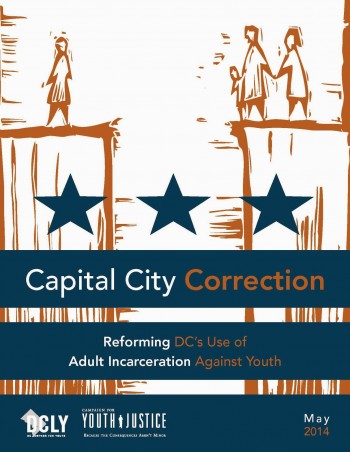 In 2012, youth in the District of Columbia spent more than 10,000 days - the equivalent of 27 years - in adult jail under a statute that enables federal prosecutors to send DC youth accused of certain crimes to adult court without judicial review, according to a new report released today by DC Lawyers for Youth and the Campaign for Youth Justice. The report cites the inadequate facilities, high risk of victimization, use of solitary confinement, long-term consequences of adult felony convictions, and failure to deter future crime as reasons to reform DC's approach to the prosecution of youth as adults by promoting the rehabilitation of young offenders and improving public safety.

According to the report, Capital City Correction: Reforming DC's Use of Adult Incarceration Against Youth, 541 youth under the age of 18 were detained or incarcerated in adult facilities in DC between 2007 and 2012. The report shows that the youth who were incarcerated in adult facilities in DC were disproportionately young men of color from low-income communities. While incarcerated in the adult jail, DC youth are housed in a developmentally inappropriate and inadequate facility where they receive limited educational, behavioral health, and vocational services and limited time with their families. According to the report, most of the time that youth spend at the adult jail is prior to trial, when youth are presumed innocent of the offense.

"The adult system is no place for kids. Youth who are incarcerated in adult facilities are 36 times more likely to commit suicide than their peers in juvenile facilities and are at a greater risk of victimization," said Carmen Daugherty, Policy Director at Campaign for Youth Justice. "Trying youth as adults also jeopardizes public safety as there is no evidence that adult court deters youth crime in general and compelling evidence that it actually increases recidivism among those who are processed through it."

DC voters agree. In a 2008 poll conducted by Greenberg Quinlan Rosner Research, 77% of DC voters believe youth awaiting trial should be held in a juvenile facility rather than an adult jail, and 71% believe that placing youth in adult facilities is minimally or not at all effective at rehabilitating youth.

Additionally, a 2011 national poll revealed that the public strongly favors individualized judicial determinations of whether a youth should be in the adult system rather than the automatic prosecution of youth in adult criminal court.

"Federal prosecutors having unfettered discretion to send our DC kids to the adult jail flies in the face of a smart, balanced, and fair justice system," said R. Daniel Okonkwo, Executive Director at DC Lawyers for Youth and a resident of Ward 6. "Judges should play a role in reviewing both the alleged facts of the case and the facts of the child to determine whether the youth and public safety would be better served by the rehabilitative goals and services of the juvenile justice system."

The report notes that 23 states, including Virginia and Maryland, have recently taken steps to reduce youth contact with the adult justice system and recommends three policy reforms for DC to promote youth accountability and rehabilitation:

For additional information and for the full report, please visit here. Also follow the conversation on social media by searching, #CorrectDC