YJAM 2014: No One Should Have to Suffer a Lifetime Because of a Childhood Mistake 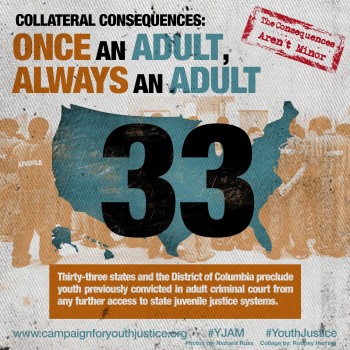 At a recent event, someone commented to me that youth who are tried in adult criminal courts have to contend with a “life sentence” of consequences that result from a conviction and completely negates the prospect of positive change for most youth.

As a youth justice advocate for the Campaign for the Fair Sentencing of Youth I often speak out against the practice of sentencing children to life without the possibility of parole, but this was the first time I had ever heard the term “life sentence” used in reference to the lifelong consequences that children face when they receive an adult criminal conviction. Such a conviction can limit access to financial aid for school, housing in many rental units, employment, voting and in myriad other ways. In that moment of clarity, I felt a sudden rush of energy and knew that what he just stated was absolutely true and unfair.

I went to prison after I was involved in a gang-related murder at 13. When I was released from prison in 2002 at age 27, I thought that I would be able to leave my past behind and start a new life. I was extremely optimistic because I had prepared for the day for many years. With my Pollyanna perception of the world, I had created step-by-step plan of action. I had never known what it was like to live as an adult, and especially as an ex-con, in free society.

What I had in my favor were two associate degrees, a certificate in computer technology and a bachelor’s degree in Social Science, with a 4.0 GPA. My passion was to find a job in social services, but over and over I was denied jobs or even a first interview because of my conviction. I had to survive, so I eventually started to work with my sister’s boyfriend, who demolished properties and cemented pavements around the city. I remember returning home after long hours of hard labor with dirt and cement lining the inside of my nails and nostrils and only 35.00 in my pocket.

My first real job came four months later when an outreach worker who was also formerly convicted spoke to the store manager of a Starbucks on the South Side of Chicago. I was finally able to work a real job part time as a barista. Many people coming out of prison are not so fortunate. Working part-time also gave me enough time to return to Roosevelt University and pursue my master’s degree—which, combined with the support of many people, eventually led to greater positions.

I can understand why some youth and young adults who are faced with these challenges—after having paid their debts to society—often give up These challenges make it difficult to make a clean break and avoid getting into trouble again.

As October comes to an end and we reflect on Youth Justice Awareness Month, we should remember that no one should ever have to suffer for a lifetime because of childhood mistakes.

Xavier McElrath-Bey is a youth justice advocate at the Campaign for the Fair Sentencing of Youth.