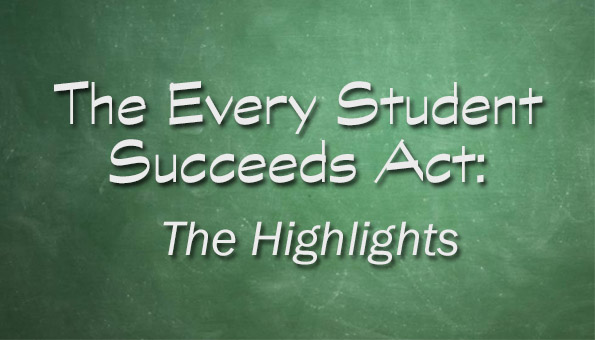 Yesterday, President Obama took a step toward improves access to quality education for young people involved in and returning from the juvenile justice system by signing the Every Student Succeeds Act (ESSA) into law, a bill that reauthorizing the Elementary and Secondary Education Act (ESEA). Established in 1965 as part of the war on poverty ESEA has provided services to schools, communities, and neglected and  low-income children over the decades.  Title 1, aimed at improving outcomes for disadvantaged children as well as the primary source of federal funding for schools and districts, has been the cornerstone of the Act. Title 1, Part D was established to provide prevention and intervention programs for children and youth who are neglected, delinquent or at risk of dropping out of school.  Part D was created in part to help ensure that the educational needs of youth who come in contact with the law are addressed, since these young people often are behind in school, have higher rates of learning differences from the general population, and can fall behind in their education during periods of detention and reentry. To help address these educational needs, Title 1, part D provides funding for state agencies and districts to assist in the educational transition of students from correctional systems back to their home communities to help ensure that they get access to the same quality education as provided in the local community.

New provisions in the Every Student Succeeds Law will help improve the success of youth involved in the juvenile justice system and strengthen their reentry outcomes by providing increased access to education and supports upon reentry. Under the reauthorized and improved law, states receiving Title 1, Part D funding for prevention and intervention programs for children and youth who are neglected, delinquent or at risk, must promote:1. Smoother education transitions for youth entering juvenile justice facilities, including records transfer, better planning and coordination of education between facilities and local education agencies, and educational assessment upon entry into a correctional facility, when practicable;2.  Stronger reentry supports for youth returning to the community, including requiring education planning, credit transfer, and timely re-enrollment in appropriate educational placements for youth transitioning between correctional facilities and local educational agencies and programs, and requiring correctional facilities receiving funds under the law to coordinate educational services with local educational agencies so as to minimize education disruption;3. Opportunities for youth to earn credits in secondary, postsecondary, or career/technical programming, and requiring transfer of secondary credits to the home school district upon reentry;4. Prioritizing achievement of a regular high school diploma not just a GED;5. Supportive services for youth who have had contact with both the juvenile justice and child welfare systems.These critical provisions fill significant gaps in the existing education law that will complement pending reentry and education reforms and provisions in the proposed Juvenile Justice and Delinquency Prevention Act (JJDPA) reauthorization bill; hopefully the next bill to get passed that supports justice involved youth.Jenny Collier is Project Director of the Robert F. Kennedy Juvenile Justice Collaborative, a joint youth reentry policy project of Robert F. Kennedy Human Rights and Robert F. Kennedy Children’s Action Corps.

Chris Scott is a senior policy analyst at the Open Society Foundation, where he advocates for criminal, civil and racial justice.

Marcy Mistrett is CEO at the Campaign for Youth Justice that advocates for the removal of youth from the adult criminal justice system, and co-chair of the Act-4-JJ initiative that advances the reauthorization of the JJDPA.