Happy Thanksgiving from CFYJ - Thanks for Your Giving 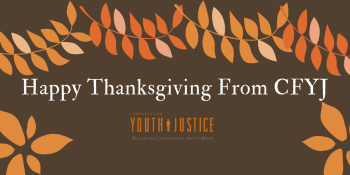 We hear from young people and their families every day who are impacted by the injustices of the adult criminal justice system, about the barriers they face, and the urgency for reform. This Thanksgiving, we would like to THANK some of the families and young people who were incarcerated as adults for all that they keep GIVING to the movement.

And to all our supporters, those who contribute their expertise, volunteer hours, unconditional love, outreach, and donations to support this movement and who join us in not resting until children no longer sit in the adult criminal justice system—we offer our THANKS for all your GIVING.

Donations to the Campaign allow us to support advocacy efforts by families and youth at the state and federal level. Thank you for giving.