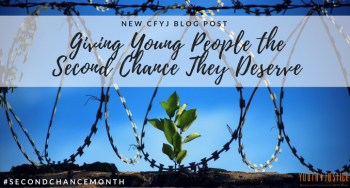 Earlier this month, President Trump signed a presidential proclamation declaring April “Second Chance Month.” This proclamation follows a 2017 bipartisan Senate resolution that called on Americans to “observe Second Chance Month through actions and programs that promote awareness of collateral consequences; and provide closure for individuals who have paid their debts.” After incarcerated people serve their sentences and leave the justice system, their past continues to haunt them by making education, employment, and housing nearly impossible to attain. This month – and always – we must do our due diligence to provide currently and formerly incarcerated Americans with a second chance to build stable and fulfilling lives as productive members of society.

Youth who have been charged and sentenced as adults are among the most vulnerable populations returning to society after incarceration. Many youth who are sent to adult prison come from impoverished communities and unstable families and have little to no resources to turn to after their release. As CFYJ found in a recent report, youth incarcerated in the adult system often lack access to education, which for most Americans serves as a vital pathway to employment. Only 60 percent of adult jails offer educational programming, and the average student-to-teacher ratio in adult facilities is 100:1. Unlike their counterparts tried in the juvenile system, youth charged as adults are ineligible to receive PELL support during their incarceration and are barred from seeking federal education grants and loans upon re-entry.

Youth who are denied the basic foundation of education struggle the most in the job market. One study found more than three-quarters of formerly incarcerated adults reported securing employment was “very difficult or nearly impossible.” Lacking access to stable employment, young people who served time in the adult system may be forced to turn to dangerous and illegal activities as a means of survival – often the same activities for which they were tried and sentenced as adults to begin with. As a result, these youth are far more likely to suffer from homelessness and are 34 percent more likely than youth who served juvenile sentences to recidivate.

While establishing and observing Second Chance Month is a commendable first step, our elected officials can and must do more to wrap their arms around vulnerable youth returning home from adult prison. We applaud the Trump administration’s efforts to acknowledge the undue burden these children – and all formerly incarcerated people – must bear as a result of a debt they have already paid.

But as President Trump urges his nation to give these people a second chance, his administration and leaders across the country are instituting policies that increase the criminalization of poor communities of color. Attorney General Jeff Sessions’ tough-on-crime approach to justice puts black and brown communities at risk, from rolling back much-need police reforms and ending the phase-out of private prisons to seeking harsher penalties for drug-related criminal offenses. Across the country, state and local officials continue to allow youth of color to be disproportionately transferred to adult court – like these cases in Tennessee and this case in Alabama. Five states have yet to raise the age of criminal responsibility to 18, a legal measure that would not only protect vulnerable youth from being funneled unjustly into the adult system, but would also save these states millions. And increased immigration policing has landed thousands of innocent youth and families in indefinite detention.

The onus is on us and on the officials we elect to give young people a true second chance at life when they leave adult prison – and that burden begins with the policies we use to criminalize and re-criminalize these individuals. Rather than creating more pathways to prison for our youth, we must give them the tools, services, and emotional support to rebuild their lives after incarceration and become thriving, productive members of our communities.