The Importance of Women’s Engagement in Our Political Process 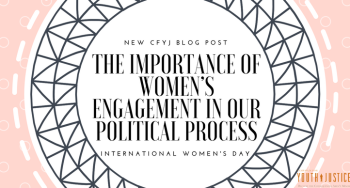 March celebrates International Women’s Day, a time where we collectively take a look around the world and throughout history to recognize the groundbreaking social, economic, cultural and political contributions of women to our country and the world. Ahead of the 2018 midterm elections, CFYJ is looking at where and how women in our country are serving in elected office, especially in positions that can benefit youth justice, as well as potential for increased engagement in this regard.

Of the roughly 42,000 elected offices in the United States, from the presidency down to local offices, women hold about 12,180 positions, or 29% of these positions.

Elected officials are instrumental in creating and implementing laws that govern our towns, cities, counties, states, and country. When our elected officials do not represent the backgrounds and experiences of their constituents, critical issues that impact those who are unrepresented are pushed to the wayside and forgotten. When women and minorities are left out of the conversation, our progression forward into the future stalls, and we fall behind as a nation.

The position of prosecutor is one of the elected positions at the county level that is critical to many issues facing women and communities of color. There are more than 2,400 elected prosecutorial positons in the United States, but only 17% are held by women – and a disheartening 1% are held by women of color. Prosecutors have the power to pursue or drop charges, what level of charges and sentencing to pursue, and how and whether to prosecute police officers for killing a civilian. In a dozen states, prosecutors have the sole authority to decide whether a child is charged as an adult.

These powers, when given to someone who does not understand the problems of the communities they serve, can lead to life-ruining consequences. Our justice system has large racial disparities that have substantial consequences to African-American and Latinx communities who are vastly overrepresented in our prisons and jails. These issues become even more severe when they start impacting our youth who are entangled in the juvenile and adult criminal justice systems.

Our children recite daily ‘one nation, indivisible, with liberty and justice for all.’ But when elected officials don’t accurately represent their communities, race- and gender-related issues go unaddressed, creating a divide that results in the greatest disservice to our children. This is evident with juvenile girls: The many of young girls who are incarcerated are simply there for status offenses, such as truancy and running away. Many of them have been victims of physical and sexual abuse and suffer from mental illness. Our nation’s corrections system, which was designed for boys, is unable to properly care for girls, and, as a result, these girls have eight times the mortality rate of the general population. Another apparent disparity is seen with African-American youth who made up 14% of the overall youth population in 2015 – but accounted for 34% of those arrested. African-American children comprise roughly 53% of youth who are transferred to the adult system from juvenile court.

In honor of International Women’s Day, we implore women not only to get out the vote this year, but also to consider running for local, state, and federal office. Be sure to support candidates who truly represent you and your community and will stand up for our children, who will be the voters of tomorrow.

And if no candidates truly represent you – Be the Change.