The Prosecution of Black Youth as Adults 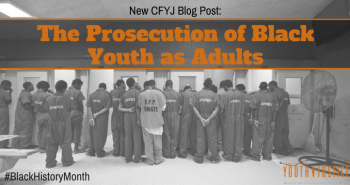 During Black History Month, we remember the esteemed black heroes and heroines of American culture.  Those who saved our future through the Underground Railroad and those who gave their lives to take us to the mountaintop, but we must also remember the youth who represent just how far our country must go to reach its ideals.

Kalief Browder, Uniece Fennell, Emmanel Akueir, and Jaquin Thomas: What do these youth have in common?  They are black youth, they were charged and prosecuted as adults before reaching the age of 18, and their contact with the adult system led them to take their lives. Their painful stories are emblematic of the plight associated with the disproportionate prosecution and incarceration of youth of color in the adult criminal justice system.

Not only are youth prosecuted as adults more likely to be black or brown children, these youth are more likely to commit suicide while in adult jail, more likely to have psychiatric symptoms than youth housed in juvenile facilities, and more likely to re-offend once they are back in their communities.  Placement in adult jails and prisons also inhibit their access to treatment, education, and members of their support networks. Youth involved in the adult criminal justice system face some of the same collateral consequences as adults, including barriers to employment, housing, education, and the right to vote.

This February, we must remember the Black youth across our country who prosecutors are trying and incarcerating as adults.  We must also fight to change this practice in our own states.  During the 2018 legislative session, states across the country are fighting to keep youth out of adult courts and jails.  Learn how you can get involved and take action to keep youth safe in your state by signing up for updates from the Campaign for Youth Justice.