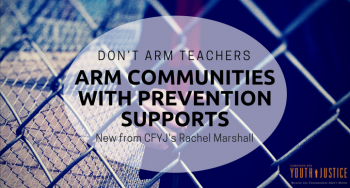 One week after a gunman took the lives of 17 students and teachers at Marjory Stoneman Douglas High School (MSD) in Parkland, Florida, students across the country stood in solidarity with students from MSD and walked out of their classes to demand action on gun control.

Time and again after mass shootings, we see a call to action, but Congress has failed to pass a single piece of legislation strengthening our nation’s gun laws despite one tragic story after another. After the Valentine’s Day shooting at MSD, and thanks in large part to the teenagers from that school who have rallied together for change, things might be different this time around.

In fact, President Trump, under pressure from the Florida students, ordered the Justice Department to issue regulations banning bump stocks, and he also has expressed support for several pieces of bipartisan legislation related to background checks. Unfortunately, Trump also suggested giving teachers a bonus to carry guns in their classrooms.

While improving our nation’s gun laws is certainly a necessary step to protect our schoolchildren and create safer communities, it is only one part of the solution. We must also implement laws and policies that focus on evidence-based practices that would prevent such tragedies altogether. Too often, the response to violent tragedies in our schools includes beefing up surveillance, increasing law enforcement presence in schools and instituting zero-tolerance policies. Yet we know that these actions cause more harm than good, particularly for youth of color and youth with disabilities.

Not only have schools expanded their zero-tolerance policies, but some state laws now require schools to report certain infractions to law enforcement agencies. While these laws are primarily intended to target criminal conduct, some jurisdictions have actually criminalized nonviolent and nonthreatening behavior in schools, including disrupting class and truancy. Instead of implementing programs and policies to address the underlying issues, students are funneled from school to the criminal justice system for behavior that could be easily addressed with the right systems in place.

Just one week before the shooting at MSD, Rep. John Rutherford, R-Florida, introduced HR 4909, the Student, Teachers, and Officers Preventing (STOP) School Violence Act of 2018. The bill now has 25 co-sponsors in the House, and Sen. Orrin Hatch, R-Utah, is expected to introduce a similar bill in the Senate.

If the legislation were to be signed into law, it would provide $50 million over 10 years for the Department of Justice’s Secure Our Schools Program. Instead of investing in more guidance counselors, social workers, mental health support and trauma-informed care for our students, funding through the Secure Our Schools grants can be used to help schools install metal detectors and similar equipment, as well as to pay for security assessments and training.

While investing in such measures might seem like an obvious step in protecting students and teachers, a report from the National Association of School Psychologists found that “[t]here is no clear evidence that the use of metal detectors, security cameras, or guards in schools is effective in prevention school violence.” The report also noted that the presence of security guards and surveillance equipment can have a negative impact on students’ perception of safety, and, in some cases, can increase the level of fear in students. One can imagine that arming teachers would have a similar effect.

Not only does Congress have a chance to get it right when it comes to reforming gun laws, they also have the opportunity to more broadly prevent violence in our communities. Instead of funding the Secure Our Schools program, Congress could reauthorize the The Juvenile Justice Delinquency and Prevention Act (JJDPA). The JJDPA was initially passed in 1974 to help address the inconsistencies in how juvenile justice systems across the country treat youth and their families.

Through the JJDPA, states who comply with the requirements of the statute receive money from the federal government to help strengthen their juvenile justice systems and invest in preventative measures to keep youth out of the justice system all together. The bill was last reauthorized in 2002 and expired in 2007. While Congress has continued to provide funding to states, the failure to reauthorize the statute has contributed to a steep decline in funding with current funding levels down 55 percent since 2002.

Luckily, for the first time since the statute expired, both the House and the Senate have passed bills to reauthorize the Act. Title V of the statute helps localities fund a myriad of evidence-based practices to prevent violence in homes, schools and communities. The bills to reauthorize the Act promote comprehensive services and supports for youth in order to further strengthen delinquency prevention.

Instead of funding measures that effectively turn schools into prisons, Congress could help states fund proper mental health care, restorative justice measures and institute trauma-informed care. We know that when states prioritize such measures, we create stronger and safer communities. Police (or armed teachers) can’t always stop violence, but communities can. It is time for Congress to invest in what works and reauthorize the JJDPA.